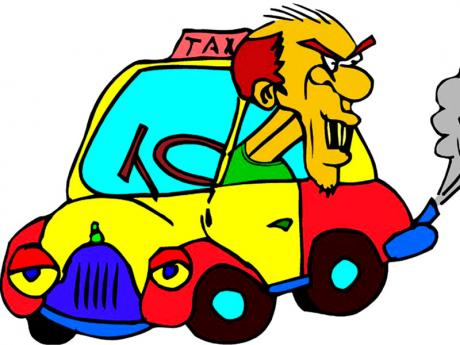 In every country, you find one topic that inevitably crops up in conversation. In Britain, it is the weather, as it is so changeable and seldom conforms with the daily meteorological predictions. In fact, foreigners get tired of hearing about the British weather.

They are known to complain, "If it's a problem, why don't you do something about it?" With climate change progressing relentlessly, they certainly have a point.

In Jamaica, the recurring topic is the traffic and everything ancillary - roads, potholes, traffic police, taxi drivers (legal and illegal), buses, cyclists, window wipers. Before you know it, you are discussing gridlock in Cross Roads, how to avoid non-functioning traffic lights at Half-Way Tree, broken-down buses at City Centre in MoBay, overtaking at stop signs, and so on.

The issues that get most attention concern avoidance: avoiding congestion, avoiding accidents, and avoiding getting caught bribing a policeman when you've been stopped for speeding.

Here's a suggestion: Jamaica needs an all-day, all-island traffic report on the radio. It should be an easy sell to an advertiser like a truck company or an air ambulance service. If the Sandals chairman and Captain Burrell are using their helicopters, we can borrow whichever one is working from the Jamaica Defence Force. So here is what your national all-day traffic report would sound like.

"Good morning, Jamaica. It's 6 a.m., and if you are on your way to catch a plane at the Norman Manley Airport, you can use Mountain View Avenue, as the usual morning gunfire around Jacques Road has abated. Or, alternatively, you can take South Camp Road once the car carcasses and tree stumps have been removed and those protesting their tickets have been dispersed from outside the Traffic Court.

"Demonstrations are also gathering momentum in Seaview Gardens, Bull Bay, August Town, Sufferers Heights and Granville to protest the arrest of their local dons. The communities there are asking for donations of any used tyres you have spare. Meanwhile, proceed with caution in these areas.

"Hello from Spanish Town municipal car park. It's 9 a.m. and no taxis are operating as yet. It seems the drivers have not paid their extortion fees and are all currently applying at the Taxi Drivers' Credit Union for a loan. Stay tuned for further developments.

"Go to our all-day all-island traffic report website for a summary of roads nationwide under repair. You will find a list of seriously dangerous potholes in your neighbourhood. We're sorry to have to announce that the stretch around Whitehouse in Westmoreland has had to be downgraded from a highway to 'an unimproved road', as it is in a deplorable state and urgently requires upgrading.

"Diversions are in place on the Howard Cooke Highway in Montego Bay. The St James Fire Brigade crews have parked their vehicle across to attract attention to the fact that they have not received their overtime pay since 1985.

"Back in Kingston, there was a peaceful demonstration on Hope Road outside Jamaica House. Unfortunately, the police tear-gassed the protesters from either J-FLAG or Save Goat Islands or We Demand Justice or all of those groups at the same time. Panic has set in. Use alternative routes.

"This is your lunchtime all-island, all-day traffic update. The smoke from Riverton City is making driving hazardous. Also in the vicinity of Bernard Lodge on Highway 2000 where cane fields on fire. An oil tanker has turned over blocking Mount Diablo, but anyone with a Chinese visa can use the soon-to-be-opened China Harbour Engineering Company toll road.

"Road crews are busy clearing a landslide in the Bog Walk gorge, but traffic over Sligoville is having to contend with some residents in Above Rocks up in arms because they haven't had a supply of water yet this week.

"If you're travelling east out of Kingston, please note the Yallahs ford is impassable, so detour through Easington. Minibus drivers in Morant Bay are protesting, which is bound to create disruption in both directions in and out of town. According to our embedded reporter, the police are clamping down on loudspeakers that the taxis are carrying on their vehicles. Speaking of beds, the taxi drivers in Spanish Town have given up trying to get a loan and abandoned their routes and gone home to sleep.

"Highway 2000 is temporarily offering free passage because the Sandy Bay toll booths are short of change. Further west, drivers using Spur Tree are alerted to watch out for the truckload of cane inadvertently dumped outside the jerk pit stop. In St Elizabeth, Great Bay cannot be reached except by boat as a result of the unexpected flooding. Fern Gully is closed for improvement."

"This afternoon, the all-day, all-island traffic report brings you breaking news from Sav-la-Mar, where Rusea's and Manning's are playing football. The game is in its closing stages and ... wait a minute ... Rusea's captain Omar 'Terminator' Smith has been given a red card for attacking a spectator with a corner flag. And ... oh, no, the fans are swarming on to the pitch. Do I hear gunshots? Here is your 4 p.m. traffic advisory: Make every effort to navigate around Manning's School as might be confronted by irate Rusea's supporters.

"It's evening drive-time here in the Corporate Area. Traffic is nose-to-tail as you would expect, travelling at four miles an hour out of the city. There is a serious bottleneck on the Red Hills Road at Eastwood Park Road. Keep your windows closed. Tempers are rising.

"Welcome to the all-day, all-island late-night traffic report from the Trelawny All-purpose Stadium, where the Roots Rock Reggae Concert is nearing its conclusion. Twenty-six acts have crossed the stage. The cultural conscious clash between Bounty Killer and Beenie Man is stirring up the crowd. Uh-oh. Bounty has just dissed Beenie's mother. Bottles are flying. The sound system is being dismantled by some disgruntled fans. Patrons are dashing for cover. There's a gun salute for Bounty and Beenie as they hurriedly depart. Chaos reigns, motorists are advised to avoid Trelawny indefinitely.

"As we approach 4 a.m. and the dawning of a new day here on the all-day, all-island traffic report, we turn once again to the Lord. Speak, O Lord, to those who pass on the soft shoulder, overtake at the traffic lights and attempt to break the sound barrier in their 1978 Toyota Corollas. Lord, if you can, caution wipers of windshields with greasy rags and smite down cyclists who ride up the wrong side of the road. For the rest of us, O Lord, give us an ease, so life on our roads does not resemble that in your Hell. Have a nice day."

Anthony Gambrill is a playwright. Email feedback to columns@gleanerjm.com.