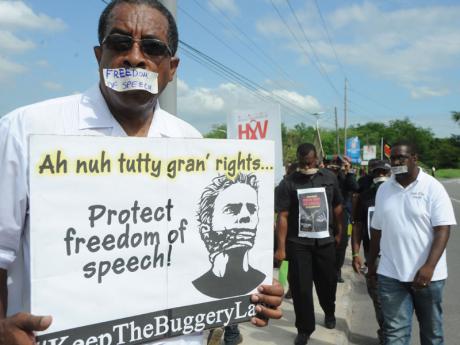 Gladwyn Kiddoe (with placard), evangelist of Bull Savannah Church of Christ, participating in a protest at the gate of the University of the West Indies, Mona campus. - File

Church leader warns that members will be mobilised to vote against any administration which changes buggery law; mass rally to send warning in Half-Way Tree today

A SENIOR member of the clergy and chief
advocate for the recently established lobby group Jamaica Churches
Action Uniting Society for Emancipation (CAUSE) has signalled that the
church would not be shy in rallying massive support from its flock to
use the ballot to punish any political organisation that rushes to
repeal the buggery laws.

"We are saying to the
Government of Jamaica, through our mass rally and motorcade on Sunday
(today) at 5 o'clock, that we would like the buggery law to be retained.
We are clear on that," declared the Reverend Dr Stevenson Samuels,
chairman of CAUSE.

At a CARICOM meeting to be held in
Antigua this week, heads of government from across the region will
discuss, among other things, recommendations on eliminating HIV-related
stigma and discrimination.

The recommendations include
repealing laws criminalising consensual sexual acts between adults and
making sexual orientation a protected category for
non-discrimination.

But Samuels is adamant that if the
Government should hold a referendum on whether provisions in the
Offences Against the Person Act dealing with buggery should be repealed,
the church would strongly advocate for Jamaicans to vote for the
retention of the law.

The opposition Jamaica Labour
Party has called for a referendum on the vexed
issue.

However, Samuels
warned that if any administration take steps to change the law on
buggery, that policy move would form part of a mix of issues that would
influence the powerful church community as members vote in the next
general elections.

He was supported by Dr Doreen
Brady-West, spokesperson for Jamaica Coalition for a Healthy Society
(JCHS), who told The Sunday Gleaner that the time has
come for Jamaica to decide how it is going to be
ordered.

She contended that such a critical decision
should not be imposed on a country by external influences, but should be
determined by its citizens.

"Everybody deserves to
have a say in what is going to form the foundations on which public
policy and laws of Jamaica are going to be made," Brady-West
remarked.

The JCHS spokesperson outlined that laws do
not come out of a vacuum but are grounded in some kind of philosophy and
world view. Consequently, she argued that the nation must decide what
is the proper moral view or philosophy upon which its laws and public
policies is going to be grounded.

"If it is left on
its own, we are going to see things that we don't want, like what
happened in the children's homes," she
added.

Addressing the political directorate,
Brady-West urged them to consider the world views and the philosophies
which they think would be applicable for Jamaica. She implored the
leadership of Jamaica to "listen to the people of the country and not to
be pressured by external forces, either international or
regional".

Today's planned mass rally by CAUSE was
initially triggered by the sacking of Professor Brendan Bain as director
of the Caribbean HIV/AIDS Regional Training (CHART)
Network.

The university said that it had become
increasingly evident that Bain had lost the confidence and support of a
significant sector of the community which the CHART programme has
targeted.

However, organisers of the rally said the
issue has become much wider than the Bain sacking.

"We
are standing up for the establish-ment of our laws on the basis of
truth and rights. We are opposing injustice wherever it is, and we are
asking that the nation rise up for truth and rights in this nation and
that our laws be based on these premises," said
Samuels.

He said a festival atmosphere is expected in
Half-Way Tree, St Andrew, this evening as hundreds of churches
islandwide will be closing their doors to support the
rally.

The clergyman pointed out that with the New
Testament Church of God, the second largest denomination in Jamaica with
more than 350 churches, throwing its support behind the CAUSE, buses
are expected to take people from as far as Westmoreland, Hanover and
Portland.

"I would say it is the first in our recent
history that we have come together to support a civil issue as a church
in such a sustained manner," he said.

"We have put
together a specialised team just to look at our message to make sure it
is properly researched and crafted to ensure that we are speaking
accurately to the issue and that we are educating the public on this
matter," he added.

The church protest comes despite
calls from a little-known organisation - Citizens Advocacy Group
International Support Initiative (CAGI) - for the revocation of United
States visas issued to Jamaican government officials and citizens who
violate the rights of homosexuals.

The group, which
says it is affiliated with international gay-rights organisations, also
wants aid supplied by the United States and Europe to Jamaica
withdrawn.

According to CAGI, it will not allow
members of the religious community to dictate the rights that members of
the gay community are entitled
to.