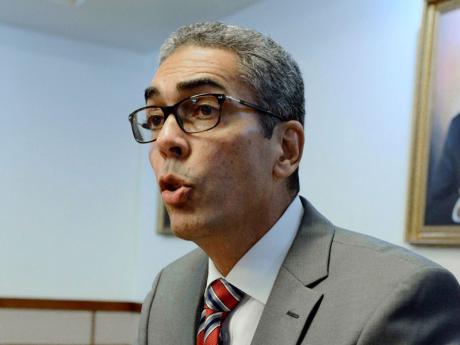 RICHARD BYLES, co-chairman of the Economic Programme Oversight Committee (EPOC), says his group is flattered by statements from Christine Lagarde, the head of the International Monetary Fund (IMF), that other countries could consider copying the Jamaican model.

"We work very hard at it. Her comments were very flattering and we really appreciate it," Byles told The Sunday Gleaner.

Lagarde last Friday praised the establishment and work of the EPOC at two speaking engagements saying the IMF has not seen a body like it anywhere else in the world.

"You have made an exceptional contribution to the programme by taking ownership, by applying private sector methods to the follow-up, to the accountability process, by collaborating with the public sector ... I have seen 13 communiqués from EPOC and I thought my goodness, we are just doing the fourth review .... this is really impressive," said Lagarde.

While accepting the commendation Byles expressed some caution.

"We are very committed to Jamaica and if this is the way that we can help, being the watchdog, telling Jamaica, through our communiqués what is really happening ... so far we have had pretty good news to convey. I dread the day if and when we have to say that the news is not good," declared Byles.

Meanwhile, finance minister Dr Peter Phillips, who established the EPOC, said he cannot take credit for the idea, even as he welcomed the work that it has been doing.

At the time of announcing the committee, Phillips said, "we are convinced that this programme represents Jamaica's programme and can only go forward on the basis of full transparency".

Last Friday, he told The Sunday Gleaner that the role being played by the committee, "is a tribute to Jamaica's ingenuity that we were able to devise this mechanism ourselves".

"I don't claim any originality, it arose out of a debate and discussion among the stakeholders ... I particularly remember the trade unions saying we have made this sacrifice we need a guarantee that the country is not going to turn back as we have done so many times in the past.

"That was a similar point raised by the bond holders who said 'this is the second time you are coming to reschedule in the space of 18 months what guarantees do you have? The only thing that you could convince is not to say trust me but to say we will make everything available to you and let us together walk this road," Phillips said.

Following the implementation of the Jamaica Debt Exchange in 2010 under the failed Standby Agreement with the IMF, the Government returned to bond holders seeking support for a National Debt Exchange programme, which was a prior requirement in order to ink the current Extended Fund Facility.

Phillips said that if any country asks Jamaica to share its experiences with them on EPOC, the country stands willing to do so.