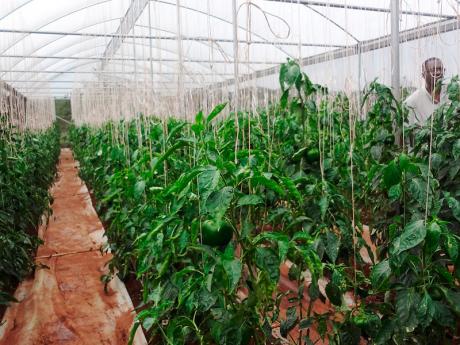 A section of the greenhouse with tomatoes and sweet peppers ready for reaping.- File

Mined-out bauxite pits are to be used for water harvesting in South West St Ann, where Member of Parliament Keith Walford is leading an ambitious programme to increase agricultural output.

The MP, contributing to the Sectoral Debate in the House of Representatives last Tuesday, said mined-out bauxite pits will be shaped by Noranda Bauxite, and the Jamaica Bauxite Institute will provide liners to line the ponds along with solar-driven pumps.

"The capacity of these ponds is up to seven million gallons of water," Walford said as he outlined a $91-million project that is taking shape in his constituency.

"In every form of life, water is the most important ingredient, and our farmers need this ingredient to produce," Walford said.

He told the House that sweet peppers and tomatoes, as well as cauliflower and red cabbage, will be grown in 60 greenhouses to be built in the constituency.

"Based on data provided, it is estimated that when these crops are harvested our import bill for these crops should be cut by more than 50 per cent,' said Walford.

In the meantime, Walford is lamenting the absence of water throughout most of his constituency.

"If the term 'water is the staff of life' holds true, then 95 per cent of the constituents of South West St Ann are dead," he said.

"For so long we are solely dependent on rainfall for this precious commodity. The drought season seems to get longer every year, most of our community tanks are in need of repair, with some communities in need of tanks. In addition, the roads leading to some of our communities are so bad that water trucks refuse to go in those areas," the first-time MP told fellow legislators.

He said while his constituents have been waiting patiently, there are signs that they are beginning to get restless as water sources in the constituency are being used supply neighbouring constituencies, "with not a drop coming to our people".

"The murmurs and complaints are getting louder, the tension is so thick you can hold it and threats are becoming contagious," Walford said.