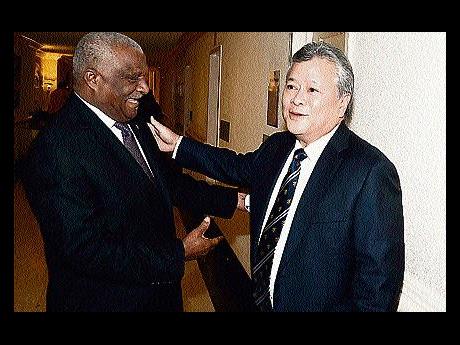 Glen Christian (left) greets one of the men of the night, Gary 'Butch' Hendrickson. 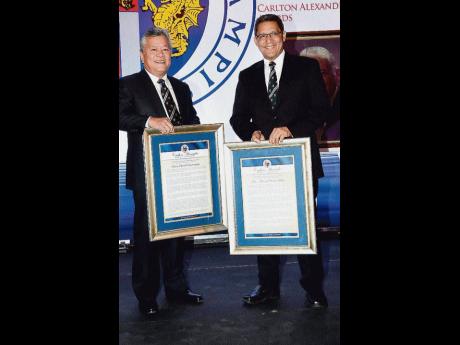 The night's guests of honour Gary 'Butch' Hendrickson (left) and Dr Jeffrey Meeks with their awards. 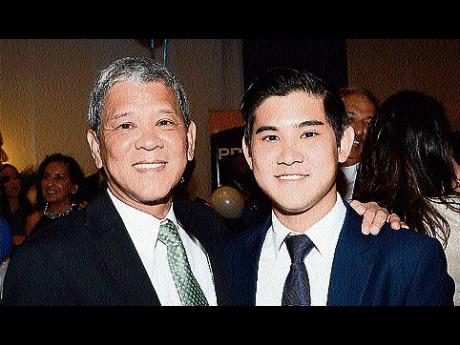 From left: Kevin Hendrickson and son, Alex Hendrickson, out to support one of the night's awardees, Gary Hendrickson.
1
2
3

It was ribbing and good old fun between long-time friends. It was a classic old boys' reunion at the 23rd Annual Carlton Alexander Awards, and this years' Jamaica College (JC) Old Boys Awardees were as exemplary as those of any other year.

Awardees Gary 'Butch' Hendrickson, chairman of National Baking Company, and renowned orthodontist, Dr Jeffrey Meeks, were praised by their colleagues and past classmates. The two buoyant men were more than humbled by their awards while supporters and fellow old boys thought that this was more than a deserving honour.

A small video highlighting the life of each man was played, and their friends and classmates spoke about their achievements before the presentation. Both were equally heart-warming and showed the loyalty of both men throughout their lives and in their respective fields.

Guest speaker, president and chief executive officer of the Jamaica Public Service Company Limited, Kelly Tomblin, gave an encouraging speech on leadership. She emphasised that one should be brave, bold, realistic, authentic, engaging and not afraid to use their voice.

The event, hosted by Ian Andrews, was not only about awards and speeches, as Andrews' wit and humour kept the mood light. There was also live entertainment during dinner by Ruth Royes and Friends, who kept the mood appropriate with a few jazz numbers and some contemporary selections such as Jennifer Lopez's Please Don't Stop the Music.

The night ended with the JC prayer that speaks to the two 'full statures of the perfect man'.