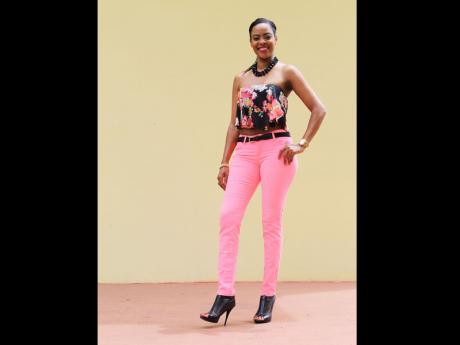 A sheer dark floral cropped top is paired with a pair of slim-fit jeans in a muted neon pink and accessorised with black ankle booties and a black double-strand necklace. 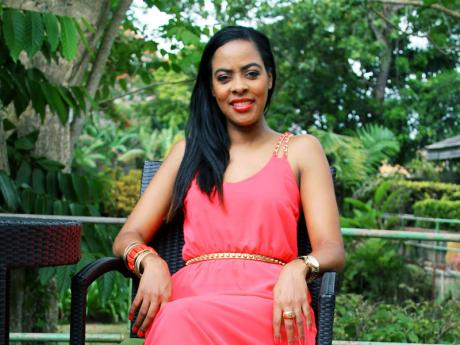 A sheer maxi dress in a punchy peach colour features gold chain straps and is worn by Barbarajean Burton with a metallic gold-studded belt and leather gladiator flats. 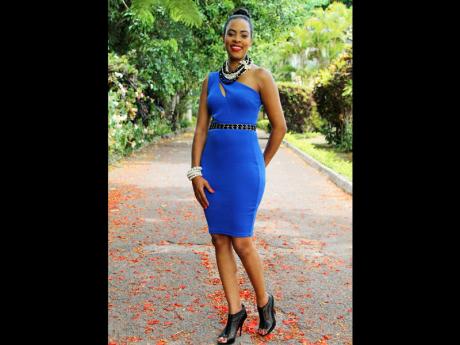 A power-pencil dress in a striking cobalt blue which features daring-but-not-tawdry side cut-outs. The look is accessorised with a black-and-gold chain-link belt and the asymmetrical neckline is paired with a non-traditional chunky necklace and ankle boots. 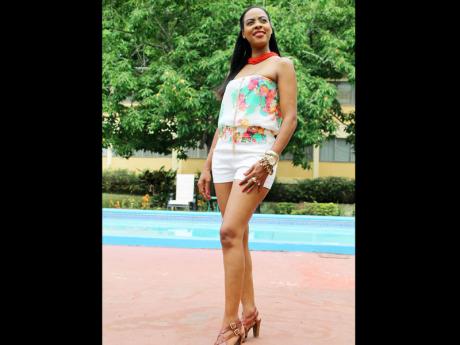 Growing up in the small, quaint district of Rudds Corner in south Manchester, Barbarajean Burton remembers her parents Lloyd and Advira Burton calling their eight children by positive titles - "my pretty daughter" or "my handsome son". Even to this day, they still greet strangers that way - "Hello, my darling" or "Hello, beautiful".

Burton tells Outlook that whenever she hears her parents utter these simple greetings to others, it lifts her spirits as it shows her the importance of positive words and just how easy it is to make someone feel better.

While her other siblings attended traditional high schools, Burton attended Holmwood Technical. She admits that this made her feel less than them, but she decided that she would bloom where she was planted. And that she did. She excelled academically, was involved in student leadership, and was also a finalist in the Miss Festival Queen Manchester. She was a hard-working student and a devoted Christian who played by the rules and was revered for her supportive and encouraging spirit - one she says was shaped by her parents .

After high school, Burton obtained her first degree from the University of the West Indies in Literatures in English and Political Science. Always an active member of her church choir, while performing at a church concert, she met the man who would later become her husband. Everything seemed so perfect - a God-fearing man who was active in the church and ambitious. They got married in 1999 at an extravagant wedding hosting 150 persons at The Mandeville Hotel.

Both herself and her husband were gainfully employed - Burton a teacher and her husband a banker. She thought her life was perfect and she had achieved it all - a honourable career and a doting husband. But Burton was in for a surprise.

Her husband was unexpectedly made redundant, and after many failed attempts at re-establishing the family's financial footing, he thought his only option was to migrate. Not wanting to hinder his quest for personal development, Burton supported his move, but stayed in Jamaica and continued teaching. She admits that, initially, the long-distance relationship was working, as she would visit and they communicated by phone and mail.

However, like everyone in her circle was telling her, she soon began to question why her husband did not want to return to Jamaica after gaining some success.

But her life was soon to take another very devastating turn when she was diagnosed with a crippling mystery illness - at first thought to be osteoarthritis, which left her partially paralysed in her right leg. She endured months of treatment and numerous costly visits to hospitals, both locally and internationally. One day, a specialist told her she might not be able to have children. She was devastated. It was also during that visit overseas that Burton confirmed what her womanly intuition was telling her - her husband was cheating, and his behaviour indicated that he did not want to be with her anymore. That was a double whammy.

Like many women who face abandonment and an impending divorce,

Burton questioned herself. "What did I do wrong? What did I not do to lead him to another woman? Was I not adventurous enough? Was I not satisfying him sexually?" She shares with Outlook, "During those times, it felt like my world was ending, but then I looked introspectively and I saw that I was still here and, therefore, I had purpose." Burton pulled herself together, telling Outlook, "I got myself together when I realised that there was more to my life than being a wife, successful woman or mother. I am a human being who is beautifully and wonderfully made, and God, the master Potter, was not finished with this clay (me) as yet. I

While going through all this, she was reminded of
God's love for her with the blossoming of a new beginning. Burton found
out she was pregnant for her soon-to-be ex-husband. She saw this as a
miracle and her unborn child gave her hope for life and a renewed joy
which helped to buffer the pitfalls of her failed
marriage.

Despite her burdens, she never felt bitter,
as was evident in her calm and collected demeanour as we spoke. "My
inner strength comes from my faith, my parents, and family members who
have always reassured me that my life will go on and that I will be
fine. Those words of comfort helped me beyond measure." she
said

Doctors and specialists have now declared her
healed of her mystery illness, and Burton credits her healing to divine
intervention. She reminisces that, during her illness, her parents
placed her name on many prayer lines all over Jamaica and transported
her when she was unable to drive to different pastors for prayers. "My
healing was a miracle from God," she said.

Today, 11
years later, the proud and happy single mother of a God-sent child -
De'Jeannae, Burton says she is healed from pain and is grateful to now
be in a fulfilling relationship with a wonderful man. As she cherishes
every day she is alive and walking, she joyfully promises to weather any
other storm that life throws at her, and will continue to encourage
others going through their personal
storms.

1. How do you spend your
weekends?

Since teaching consumes most of my
waking hours in the week, I spend my weekends doing household chores,
taking care of my daughter, and shuttling her to dance rehearsals,
birthday parties and church activities. As a devout Christian, going to
church on Sundays is also an integral part of my week. I also love to
support my friends, co-workers and loved ones in times of bereavement.
So a number of weekends will find me at
funerals.

2. Where is your favourite vacation
destination in Jamaica?

I love two equally,
The Grand Palladium Jamaica and Lady Hamilton Resorts and Spa in
Hanover.

3. Where is your dream vacation spot
internationally, and why?

I would love to
visit Italy, especially Rome. This is my dream vacation spot because
Rome boasts the beginning of the modern Church, and has breath-taking
sites and architecture. I'm so in love with this place that my
daughter's middle name is Itallia.

4. Who is
your favourite author?

5. What is the best advice
you have ever received?

One of best pieces
of advice I received was from my mother. In 2002, during my illness, she
told me that the fact that I was still alive meant I had not yet
fulfilled my purpose to which God has ordained me, so I could not give
up.

6. Which charity means the most to
you?

The John Boscoe Boys' Home in
Hatsfield, Manchester. This home houses several young men who have been
abandoned by their parents, yet they still find courage to be
self-reliant by engaging in farming and animal husbandry which provide
food for themselves and the wider community.