Colombia on a high at WCup 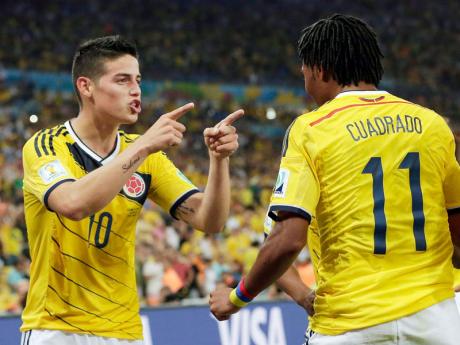 With a spectacular swivel-and-strike, James Rodríguez provided one of the highlights of the World Cup and gave Brazil reason to worry.

Rodríguez scored one of the best goals of the tournament and added a second to put Colombia into the World Cup quarter-finals for the first time with a 2-0 win over Uruguay yesterday - setting up a meeting with the host nation.

Rodríguez added to his growing list of memorable moments in Brazil when he gave his team the lead with a long-range volley as he turned in the 28th minute. He scored the second from close range shortly after the break as Colombia dominated an Uruguay side that sorely missed banned striker Luis Suarez.

"I think now the toughest is coming up," Rodríguez said of the quarter-final match against Brazil. "I'm happy because we are making history and as a young man I dreamed of being here. And of course we want to do even more."

Rodríguez now has a tournament-leading five goals in Brazil and further enhanced his status as perhaps the World Cup's biggest revelation. In the absence of injured star Radamel Falcao, the Monaco winger has become the focal point of a Colombia team that won all three of their group games with impressive attacking play.

Uruguay, meanwhile, simply couldn't find anyone to fill the absence of Suárez. The team struggled badly in attack and replacement striker Diego Forlán was substituted in the 53rd after a disappointing performance in what was likely his final World Cup appearance.

Colombia will play Brazil in the quarter-finals on July 4 in Fortaleza after the host nation beat Chile in a penalty shootout earlier Saturday.

But Rodríguez showed once again that the Brazilians have every reason to be wary of Colombia.

The opener was his most spectacular goal yet. He chested the ball down with his back to goal well outside the area and in one fluid motion turned around and fired a left-foot volley that went off the underside of the crossbar and into the net.

"I think he is the best player of the tournament so far," Uruguay coach Óscár Tabarez said.

Rodríguez's second was a perfectly executed team move as Colombia worked the ball over from the right flank to the left, where Pablo Armero sent in a cross that was met by Juan Cuadrado at the far post. Cuadrado headed back across goal toward Rodriguez, who slotted in from just a few yards out.