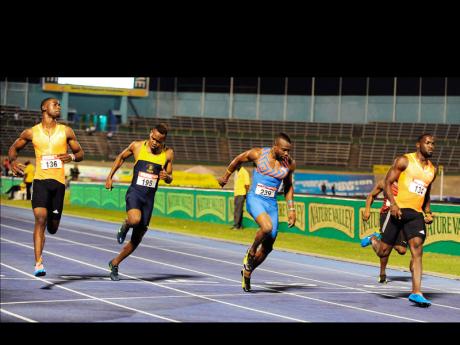 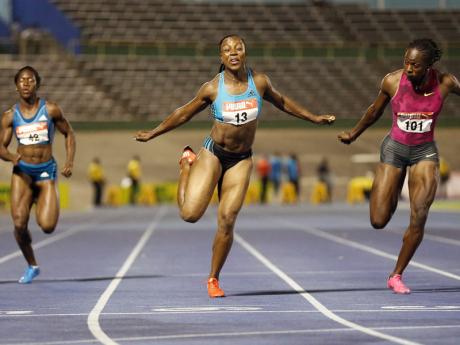 Veronica Campbell-Brown (left) winning the women's 100-metre final on Friday night at the JAAA/Supreme Ventures National Track and Field Championships. Campbell-Brown clocked 10.96 seconds to finish ahead of Kerron Stewart, 11.02. Schillonie Calvert (not in photo) was third in 11.15. - Photos by Ian Allen/Staff photographer
1
2

Campbell-Brown made a triumphant return to the National Stadium. She had missed last year's championships after failing a drug test at the same venue after competing at the Jamaica International Invitational meet in May.

Known for her average start, Campbell-Brown showed that she had worked hard on this aspect of her race as she was one of the best out of the blocks, which must have surprised her main rivals, Kerron Stewart, the defending champion. Despite a close battle for the majority of the race between the two, it was the excellent top-end speed of Campbell-Brown that prevailed in the end. She won in 10.96 while Stewart was second in a season best 11.02. Schillonie Calvert equalled her season best of 11.15.

The fans gave Campbell Brown a standing ovation after her win.

"I would like to thank my fans who came and supported me, as I have many fans in Jamaica and what I did tonight was not just me doing it, but it was the Lord who did it for me," said Campbell-Brown.

Known more for his 200m running, Ashmeade captured his first men's 100m title in fine style. With top men Usain Bolt's and Yohan Blake's absence, all things were pointing to a very competitive event as several athletes came to the meet with big credentials and this was evident from the semi-final stage, where it was extremely close among the top athletes.

There was some disappointment for the fans, however, as two athletes, Nesta Carter and Andrew Fisher, who have been doing extremely well so far this season, withdrew from the final after picking up injuries.

At the start, it was Ashmeade who got away best and held on from the fast-finishing pair of Jason Livermore and the slow starting Kemar Bailey-Cole.

Ashmeade picked up the win with a season best 10.06 in a negative wind of 1.5 metres per second. Livermore showed that his improved form this season was no fluke as the Michael Clarke-coached athlete ran a personal best of 10.11 seconds for second place. Bailey-Cole had to settle for third in 10.16.