Sky's the limit for Justin Burrowes 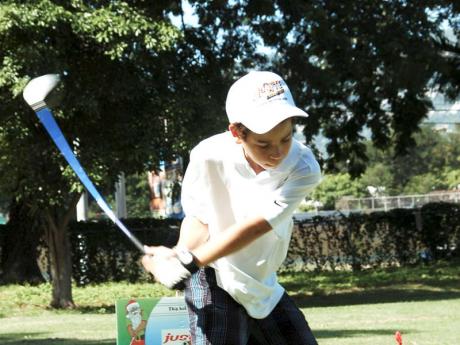 Justin Burrowes has hit golf's mark yet again, this time by winning the Optimist Junior International qualifier held in Florida with a score of 76 points.

Burrowes outperformed a compact field of juniors from North America as well as the Caribbean. Having won last week's open-day trials, coach Jason Lopez remains confident of his form and quality to match other junior golfers internationally.

"Justin is ranked number one in Jamaica for Under-13s and is among the top five across the Caribbean where he won the recent Junior Open Championship in Trinidad and Tobago. My assessment of Justin is that he is the best potential golfer that Jamaica has ever seen. His ability to hit the ball is definitely world-class," noted the coach.

While giving high marks to the teen for his achievements, Lopez was quick to point out that it is back to the drawing board for upcoming tournaments.

"He will be training hard over the next three weeks before we depart for the West Palm Beach championship in Florida, July 20-24. Then to Puerto Rico from July 27 to August 1, where Justin is a front runner to claim top spot," Lopez noted.

The coach maintains that Burrowes' win should not be underestimated although it was a trial event.

"He won the day-long trial and it is for one of the top five biggest tournaments in the world. In Florida there were many golfers from all different categories and skills competence, so Justin did exceptionally well not only to win but qualify," Lopez outlined.

Meanwhile, Lopez has put the nation on alert as he is sure that there are big things in the making for Jamaica in the field of golf, given the determination and quality of Justin Burrowes who he describes as always eager to play and give his best.

"I expect Justin to do great things. This is his year, since winning the Caribbean Junior Championship his level has gone up a notch so Jamaica can expect great things from him," added the coach.