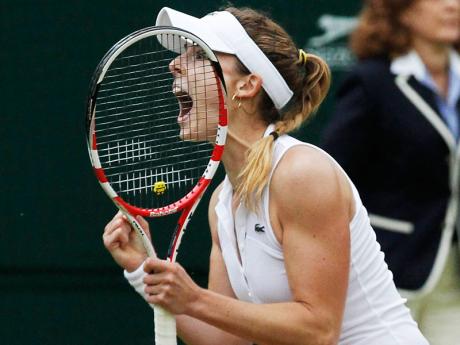 All of a sudden, Serena Williams is failing to stick around for long at Grand Slam tournaments.

Betrayed by her backhand and, more surprisingly, her usually dangerous serve, five-time Wimbledon champion Williams lost to 25th-seeded Alize Cornet of France 1-6, 6-3, 6-4 yesterday in the third round at the All England Club.

"If I'm not playing a great, great match, these girls, when they play me, they play as if they're on the ATP Tour, and then they play other girls completely different," Williams said, rolling her eyes. "It's never easy being in my shoes."

Three other past Wimbledon champions won on Centre Court, where the roof was closed, Rafael Nadal, Roger Federer and Maria Sharapova.

Sharapova, the 2004 champion, was up next in the main stadium, and she, too, overcame a slow start. But after falling behind 3-1, she won 11 consecutive games for a 6-3, 6-0 victory over 44th-ranked Alison Riske of the United States.

Nadal next faces 19-year-old Australian Nick Kyrgios; Federer meets No. 23 Tommy Robredo of Spain, who beat 2013 semi-finalist Jerzy Janowicz of Poland 6-2, 6-4, 6-7 (5), 4-6, 6-3; and No. 8 Milos Raonic, only the second Canadian man in the Open era to get to Wimbledon's fourth round, plays either No. 10 Kei Nishikori of Japan or unseeded Simone Bolelli of Italy, whose match was suspended because of darkness at 3-all in the fifth set.