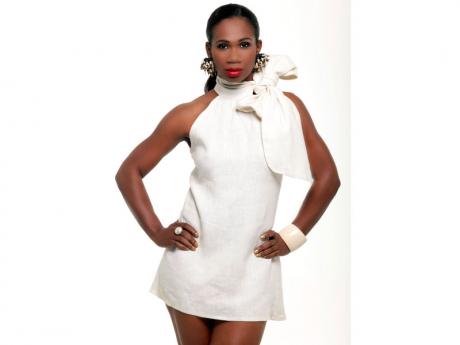 With a new single about to hit the market, a music video on the immediate horizon and an upcoming promotional trip to the United States, singer Sophia Brown is anticipating a busy second half of 2014.

The singer, who in May was awarded a Lifetime Achievement Award at the Linkage Awards in New York, is also expanding her merchandising line to include items for her male fans.

Brown, whose vocals are featured on the recently released Black Ice single, We're Lovers, is also getting ready for the official worldwide release of her latest single, Wide Awake, a tune about falling in love.

The song which is produced by Christopher Tyrell for Cabbaca Sound Productions will be distributed by Zojak Worldwide and is tentatively set for release on July 1. Brown says the feedback so far has been positive. "The single is doing well," Brown said, noting that feedback has come from the Caribbean, the United States, Europe and Canada. "Momentum is also picking up here in Jamaica in terms of airplay. We're looking forward to an exciting worldwide release."

The song, along with her other recent single, Touch Me, is expected to feature on a new album currently in production. She reveals that the album could also include another single, Reign over Me that is set for release after the summer. She was non-committal about when the album would be released.

Meanwhile, the video for We're Lovers, is scheduled for release soon. Following her appearance at the Linkage Awards in May, Brown had flown to Los Angeles to shoot the video with Black Ice. Brown said the video should be out in just about a week's time.

With all the music Brown has out or coming out, the singer reveals she is also preparing for a trip to the United States where she plans to promote the new single. She plans on targeting New York and the tri-state area as well as Canada. "I want to get more of the North American market into the mix," she said.

In addition to building her growing catalogue, Brown is also boosting her merchandising line that she started in 2010. The Sophia Brown line of products is manufactured and distributed in the United States by Café Press, a company, which specialises in custom designed items and includes window curtains, yoga mats, wall clocks and maternity wear.

Brown reveals that several items are to be added to the line in the near future including men's neckties. "We're adding neckties for the first time, as I don't want my male fans to feel left out," said Brown.