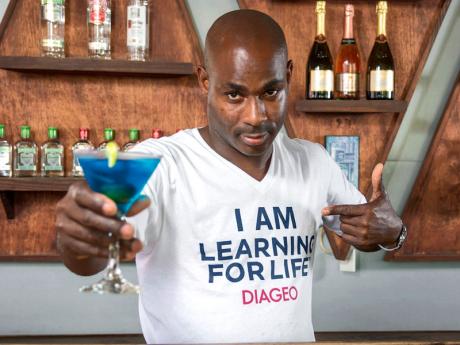 Thirty-four-year-old Phillip Lovejoy is living his dream. He gets to travel to exotic locations and meet celebrities. He also gets to promote his country to the people he meets each day on the job as a bartender on the Carnival Cruise Line.

"The first ship I went on in February 2013, was the Carnival Sensation leaving out of Orlando, Florida to Nassau," recalled the man who shares his skills between the Medusa Bar and Grill on Hope Road and the cruise liners. "While there (in Nassau), I met (R&B legend) R. Kelly and (the world famous hip-hop artiste) Rick Ross. I remember R. Kelly saying he has been to Jamaica several times but he had never got a bartender to serve him."

Since that time, the Jamaica College old boy has gone on to work on the Carnival Dream and the Carnival Triumph and has travelled all across the region, including the United States Virgin Islands, St Maarten, Grand Turks, Cozumel, and Honduras, among others.

None of this might have been possible, however, had Lovejoy not signed up for Diageo's Learning for Life Programme four years ago. The programme is designed to inspire and transform the lives of people throughout the different communities in which Diageo conducts business. With a focus on adult education, the programme is implemented in partnership with local educational, governmental, and training organisations and provides tools, training and skills in four key areas - hospitality, retail, entrepreneurship and bartending.

"I've always wanted to become a bartender. I was involved in the music industry and decided I wanted to do something else as well," Lovejoy told Flair. In 2010, during the six-month programme, Lovejoy said he was inspired by cricket legend Courtney Walsh, who addressed them during an orientation session. He would later return to provide similar inspiration to candidates just enrolled in the programme. Each time he goes back he is also inspired to do more, he said. On one such occasion, he said Assistant Commissioner of Police Justin Felice urged the candidates to seize any opportunity that came their way because it could be the only one that comes. Those words, he said, have always remained with him.

Lovejoy is happy to give back to the programme that has done so much for him. "I am currently engaging youngsters to get into the programme, and I even want to pay for some of those young people to be a part of the programme," he said.

When he first joined the Carnival Cruises he got some sound advice from a colleague, a 25-year veteran in the industry. "He said, 'Don't follow company, focus on your job, make some sales and you will make good money'," he said. Those things have stuck with him and he has translated it into developing a great work ethic and enhancing his burgeoning reputation.

While on the job, he also continues to give back to the company that has helped him. "I've met a lot of people who have heard good things about Jamaica and want to come to Jamaica. Most have been introduced to some good Red Stripe Beer," he said. "Each ship has branded space and I work at the Red Frog Rum Bar. Red Stripe is one beer I serve at that bar."

It's the least he can do, he said, to give back to the people and programme that has helped empower him. "It's been a fulfilling experience," he said. "It has given me the opportunity to achieve a few things in life."

But he isn't done yet. He returned to the Carnival Triumph on June 25. "I have a wonderful boss who wants me to come back," he said.