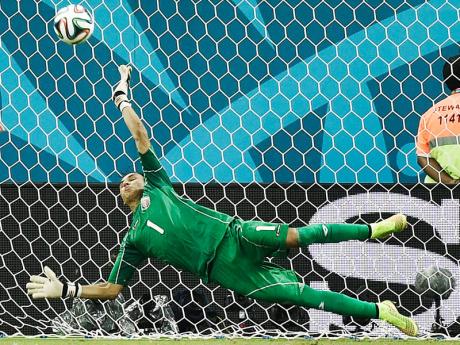 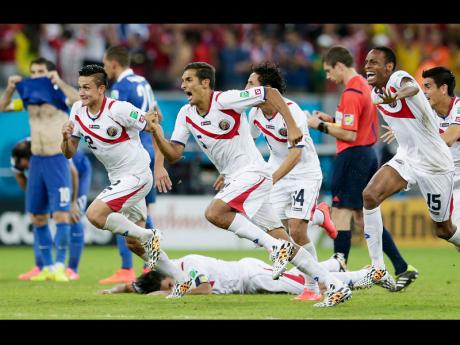 Costa Rica players react after Michael Umana scored during a shootout after regulation time in the World Cup Round of 16 football match against Greece at the Arena Pernambuco in Recife, Brazil, yesterday.
1
2

Costa Rica beat Greece in a penalty shootout yesterday to reach the World Cup quarter-finals for the first time after defending desperately with 10 men for nearly an hour.

Greece's Theofanis Gekas saw his penalty saved by Costa Rica goalkeeper Keylor Navas for the only miss in the shootout. Umana scored and straight away sprinted over to where Navas stood to hug him after the goalkeeper kept Costa Rica's surprise run at the World Cup alive with a string of last-gasp stops through the 120 minutes.

The rest of the Costa Rican squad, which had knelt in a line during the shootout, also came racing over to join the celebrations.

Costa Rica will play the Netherlands in the quarter-finals on Saturday in Salvador - a first appearance in the last eight for the small Central American country that no one picked to even make it past the group stage.

"To the entire people in Costa Rica, those at home and out on the streets, this is for you," Costa Rica's Colombian coach Jorge Luis Pinto said. "This is a people that love football and they deserve it. ... We will continue fighting. We will go on. We see beautiful things."

Costa Rica had taken the lead early in the second half at Arena Pernambuco through captain Bryan Ruiz's smooth finish, but then had defender Oscar Duarte sent off in the 66th minute with a second yellow card for a mistimed tackle on Jose Holebas.

The red card changed the game and Greece poured forward for most of the remainder of the match.

The Greeks equalised and finally beat Navas in injury time of regulation play when defender Sokratis Papastathopoulos smashed in a rebound from another Navas save to make the team's numerical advantage eventually pay and temporarily keep them in the World Cup.

Greece continued to storm forward in extra time, but Navas stood in the way. He made three crucial stops just in extra time, when Greece's Costas Katsouranis, Lazaros Christodoulopoulos and Konstantinos Mitroglou were all denied.

"Obviously he has to be congratulated," Greece coach Fernando Santos said of Navas. "If it weren't for (him), the results would have been different."