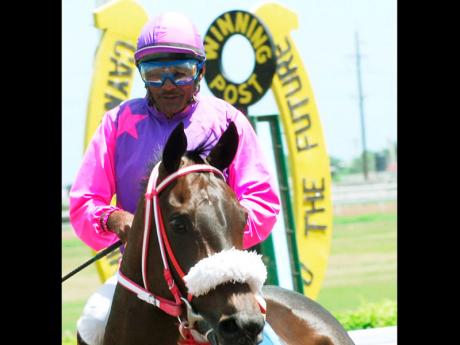 PRINCESS POPSTAR with Percy Williams aboard.

The 2013 'Horse of the Year', PRINCESS POPSTAR, turned in another smashing performance on her seasonal debut at Caymanas Park yesterday, making all the running to win the Gerald Skelton Memorial Trophy overnight allowance race over 1100 metres in a smart time.

Sidelined by a muscle injury while preparing for the Thornbird Stakes (Guineas Trial) in February, the brilliant, unbeaten three-year-old filly, who was having her first outing since winning the $4.25 million Supreme Ventures Jamaica 2-Y-O Stakes over a mile last Boxing Day, reported in unbeaten fashion and was merely racing against the clock in the straight, stopping it at 1:05.3 behind splits of 23.0 and 46.0 for the half-mile.

Installed a 1-5 favourite with former champion jockey Percy Williams riding for 14-time champion trainer Philip Feanny, 'POPSTAR' was early in the lead from the number-six post position in a field of 11. She turned for home some six lengths clear of the chasing RUNJOHNNY RUN (12-1), and only had to be pushed out to win by seven lengths from 3-1 second-favourite PISCEAN ROCKET.

Herbie Chong, who co-owns PRINCESS POPSTAR with Paul Hoo, said the talented bay filly by Adore The Gold out of Docs' Paladin did what was expected of her.

"We are happy that she has overcome her injury and come back to win so impressively today. It's only a pity that she had to miss the classics, including next Saturday's St.Leger. But missing the classics is nothing compared to her well-being," said Chong.

"The plan is to run her in the Trinidad Derby in September, and she might not have another race before leaving for Trinidad," added Chong, who was non-committal to arguments going the rounds that she might not return to Jamaica.

Significantly, Chong was part owner of the outstanding colt BRUCEONTHELOOSE, who after losing the 2009 Jamaica Derby by a short head to HE'S REALLY OK, was shipped out to Trinidad and not only won the derby in the twin-island republic that year, but four subsequent 'Horse of the Year' titles.

Earlier in the afternoon, STEP IT UP, running at odds of 9-2 with Robert Halledeen aboard, made all convincingly to win the 19th running of the Sports Journalists of Jamaica Trophy (claiming $350,000-$300,000) over 1200 metres.

Owned by Orville Johnson and trained by Stedman Curtis, the 5-y-o gelding won by 2 1/2 lengths, as the howling 4-5 favourite DR. BLAIR (apparently lame) ran no race at all to finish last of the seven runners.

On a card which saw the stewards disqualifying seventh-race winner JAGSOVER (9-1) for causing interference and promoted the 44-1 outsider KERRY DANCER to first, it was a bad day at Black Rock for punters, as PRINCESS POPSTAR was one of only two favourites to oblige on the nine-race programme.