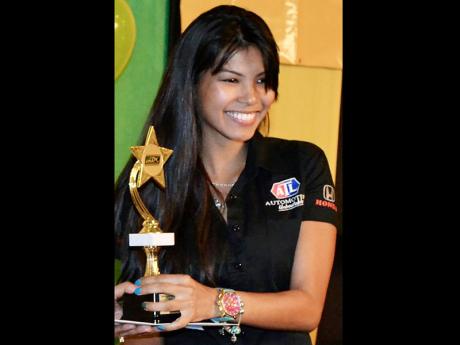 Jamaica's Reggae Racers have expressed confidence ahead of their trip to Barbados for the opening leg of the Caribbean Motor Racing Championships (CMRC) from July 5 to 6. Jamaica will send a six-member team to the championships that concludes here in Jamaica in 2015, where the final leg will be held from February 21-22.

For some of the drivers this represents the first time they will be racing overseas. They have admitted that while there are some nerves they will be aiming to give of their best at the meet where one team member will create history as the first female driver to represent the country at the CMRC.

The history-making Natasha Chang will be the only female member of the Jamaican team that also includes Doug Gore, Peter Rae, Sebastian Rae, Vivian Mitchell and Kyle Gregg. She will compete in the Super Modified One class for local competitors, so she will not be able to contribute points to the team. However, she still promised to bring all the aggression she can muster.

"I am very honoured to be representing the Reggae Racers and I will not disappoint," said the driver who is being sponsored by Platinum Motors (Honda Barbados). She said she had her car done up in the Jamaican colours.

During a press conference held at the offices of the Sports Development Foundation (SDF) on Phoenix Avenue in Kingston on Friday, the diminutive racer said her accomplishment as being the first female representative shows that no matter what women can accomplish their goals.

"We can accomplish anything we put our minds to. I am helping to break that stereotype that you don't have to give up your femininity. It took time and work to get where I am," she said.

Kyle Gregg has stamped his class on the local circuit over the past few years and claimed the Jamaica Race Drivers Club Driver's title in 2012 over the likes of David Summerbell and Gore. However, he expressed that travelling to Bushy Park in Barbados is, for him, going into uncharted territory.

"I have to admit I am a little nervous but I believe we have a strong team," he said. "It's my first time travelling overseas with the car. I wouldn't mind making a name for myself overseas."

Similarly, Mitchell admitted to some nerves as this coming trip will also be his first time racing abroad but expressed confidence in his team.

"I have never raced overseas before but hopefully we can dominate and take home some trophies," he said.

Both Gregg and Mitchell will race in Group Two, while Peter Rae and Gore will compete in Group Four.

Jamaica will also be represented in Group Four by a foreign-based representative.