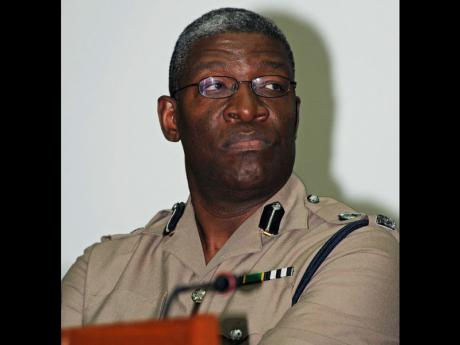 NATIONAL SECURITY Minister Peter Bunting has sought to make it clear that outgoing Police Commissioner Owen Ellington was not forced out.

Bunting's assertion came minutes after Ellington's surprise announcement late yesterday that at the age of 51, he was bringing an end to his 34-year career in the Jamaica Constabulary Force (JCF), setting off speculation about the reasons for his decision.

"He was not pushed out. We had a very good working relationship ... .He came to this point on his own," Bunting said in an interview on the RJR news programme 'Beyond the Headlines' yesterday evening.

"I was satisfied with his performance," the minister added, even while admitting that he did not try to dissuade Ellington because he felt that the commissioner's decision was carefully thought out.

In his announcement, made through a statement released by Bunting's ministry, Ellington indicated that his decision to retire "is based on the need to separate himself from the leadership and management of the Force" [JCF] before the start of the Tivoli Gardens commission of enquiry and "other areas during the limited state of emergency in 2010".

The country's 47th police commissioner also pointed out that his departure will allow the Independent Commission of Investigations (INDECOM) to probe allegations of police-involved killings, or the existence of so-called death squads, in the Clarendon Division "without any perception of influence of interference on his part".

Hinds to act as commish

The security ministry also announced that effective today, Deputy Commissioner Glenmore Hinds, who heads the operations portfolio, will act as commissioner of police.

However, Opposition Spokesman on National Security Derrick Smith is among those who find these reasons "difficult to accept".

"Because I had a meeting with the commissioner two Mondays ago, and during that meeting the commissioner was extraordinarily enthused about the future of the Jamaica Constabulary Force and the plans he had to be implemented," Smith revealed.

"There was no indication of any frustration or any difficulty, so this is a shock to the Opposition and to me personally," he added.

But Bunting insisted that he did not ask Ellington to step down as a result of the interim report by the Office of the Public Defender into the conduct of members of the security forces during the joint operations in 2010 to nab then fugitive Christopher 'Dudus' Coke.

Some 75 civilians and one Jamaica Defence Force soldier were killed when, according to the security forces, armed thugs loyal to Coke engaged them in a fierce firefight in the west Kingston community.

Despite the speculation about the reasons for his early retirement, Ellington was widely lauded for what many described as the transformative leadership he brought to the JCF.

Heaping praise on Ellington, Hinds said history would record his contribution to the country's security and give him "a favourable mention".

"His strategy of transformation is unprecedented and the country owes him a debt of gratitude it will never be able to repay," Hinds insisted, noting that he will continue with the nine strategies and policy put in place by his former boss.

Director of Public Prosecutions (DPP) Paula Llewellyn praised Ellington as someone who had "tried his best, within the particular exigencies that we all have to work with, to facilitate continued consultation and cooperation on law-enforcement issues".

A graduate of Glengoffe High School, in St Catherine, Ellington enlisted in the JCF on August 1, 1980 and rose through the ranks to become commissioner on April 5, 2010.