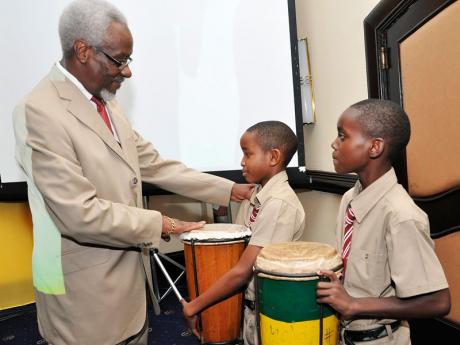 Former Prime Minister P.J. Patterson tries to find a rhythm on the drums of Steven Simpson (centre) and Don-Antonio Phillips, both of Glenmuir Preparatory School, at the opening day of an international strategy meeting on protecting children from violence, at The Jamaica Pegasus hotel yesterday. - Jermaine Barnaby/Photographer

Former Prime Minister of Jamaica, P.J. Patterson, has implored delegates who will be taking part in the two-day United Nations Cross-Regional meeting to give serious thought as to how to build communities that are more peaceful and safe for children.

"No matter what we do, it cannot insulate our children from the effect of violence when it is rampant in the communities where they reside. Remember, they will be influenced by the patterns of behaviour which they see all around them," Patterson said.

He was making the keynote address at the start of the cross-regional meeting yesterday at The Jamaica Pegasus hotel in Kingston.

This is the first time that this high-level round-table meeting is being held outside of the United Nations head office in New York.

It is being jointly hosted by the minister of youth and culture, Lisa Hanna, and the special representative of the UN secretary general on violence against children, Marta Santos Pais.

They are expected to develop strategic recommendations on how the various regions of the world can collaborate on preventing and responding to violence against children.

"There can be no lingering doubt on the path and, pace required to reduce and ultimately, eliminate all forms of violence against children. Our children deserve to be spared all forms of abuse and stigma," Patterson noted.

"The future happiness of children suffering today and others who are at risk of abuse may hinge on the output of your deliberations over the next two days. I urge you to deliberate with steadfastness, constantly reminded of the seriousness of your mandate," he continued.

Patterson also stated that he believed the country would go even faster and further forward if Jamaicans were able to work together to change values and attitudes towards violence, child-rearing, parent-child relationships and society-child relationships.

"In many of our societies, we have practised a violent parenting style in which we do not communicate effectively with children through speech," he said.

"Part of the solution to our problem lies in giving effective support to parents so that they can live up to their responsibility. Too many men and women become mothers and fathers long before they are ready and too many of them just do not have the support to become effective parents," Patterson added.

Among the participants will be representatives from regional organisations such as Council of the Baltic Sea States, Council of Europe, and the Inter-American Commission on Human Rights.