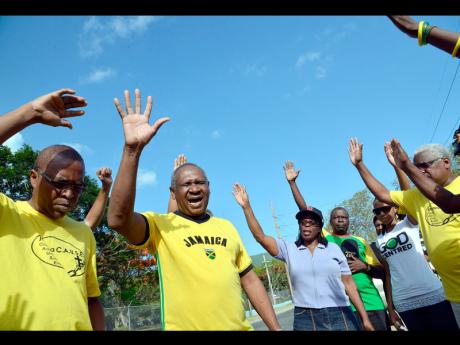 Church leaders say a word of prayer in front of the University of the West Indies, Mona, Sunday just before leading a motorcade to Half-Way Tree, St Andrew, for a church rally.

WHILE THE Opposition Jamaica Labour Party remains unmoved from its position that a referendum should determine whether the laws relating to buggery should be repealed, the governing People's National Party (PNP) has not arrived at a collective position on the issue.

And it appears a political decision on the issue could have consequences at the polls as the thousands of Jamaicans who gathered at Half-Way Tree to support the Jamaica Churches Action Uniting Society for Emancipation (CAUSE) were given a charge by presenters to "get enumerated" as they dared any administration to remove the criminal offences against buggery.

Deputy general secretary of the PNP, Julian Robinson, told The Gleaner yesterday that the party has not come to a single position on the controversial issue. During a national debate on the eve of the general election in 2011, Prime Minister Portia Simpson Miller pledged to review the laws on buggery. However, to date, the issue has not been tabled in the House of Representatives for deliberation.

Meanwhile, the lines that usually demarcate religious groups in Jamaica were virtually erased Sunday night in Half-Way Tree when Rastafarians, Muslims and Christians stood firmly against what the leadership of the massive rally described as the "homosexual agenda" that has been unleashed on the society.

In what is being described as the Half-Way Tree Declaration, CAUSE declared that it rejected the alleged attempt to hijack worthwhile programmes for control of HIV/AIDS in order to impose an LGBT (lesbian, gay, bisexual, transgender) political agenda on the Jamaican people.

The group called on the country's leaders to "reject any regional or international pressure to adopt policies that will overhaul traditional values and practices of Jamaican society".

Additionally, the group has urged the leadership of Jamaica to reject any plans to repeal the sodomy laws and to discard reference to sexual orientation as a protected category for non-discrimination in any legislation, and policies in private or public bodies, including schools.

Sunday's march on Half-Way Tree by CAUSE was first triggered by the sacking of Professor Brendan Bain as director of the Caribbean HIV/AIDS Regional Training (CHART) Network. The University of the West Indies claimed that it had become increasingly evident that Bain had lost the confidence and support of a significant sector of the community that the CHART programme has targeted. He has since sued the UWI and been provisionally reinstated.

The rally was also intensified following reports that rights group Jamaicans for Justice had introduced inappropriate sex-education material in six children's homes. The matter is now the subject of a probe by both the police and the Office of the Children's Advocate.

Excerpts from the Half-Way Tree Declaration:

We affirm that all human beings are created in the image of God and, as such, possess inherent human dignity, and are entitled to the free exercise of fundamental human rights.

We assert that no state or international agency can create fundamental human rights, but can only recognise them. Jamaican lawmakers should reject rights claims that are neither universal nor fundamental.

We assert that males and females are equal in dignity and are complementary. Marriage and procreation are based on the natural complementarity of male and female and foundational to the very existence of the human race.