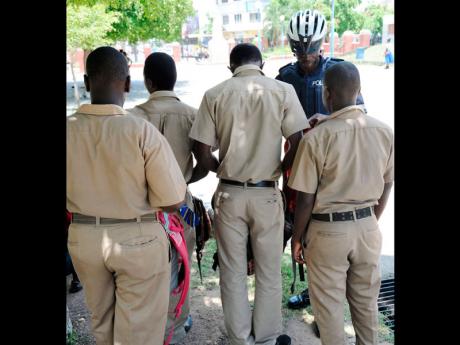 A policeman conducts a search of schoolboys who were seen loitering in the St William Grant Park in downtown Kingston. - File 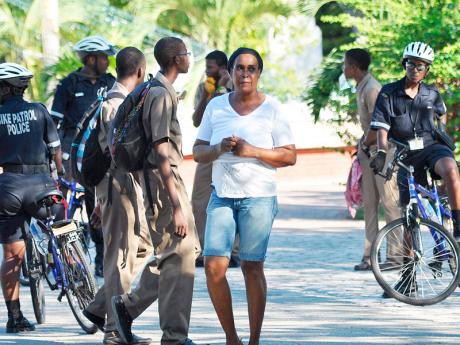 The Kingston Central police have implemented new measures to ensure that persons who visit the refurbished St William Grant Park in the heart of downtown Kingston can do so safely, and already persons are heaping praises on the cops for the move.

"Boy me nah lie, everybody a say dem like how the police dem inna the park all day," said one photographer who told our news team he has been operating in the facility for more than 20 years.

"The police presence gives people more confidence and we feel safer while in the park as the police are here up to 10:00 in the nights," added the photographer.

Other users of the park agreed as they said the policemen and women have been "keeping things under control".

"There are no more persons losing their phones, the schoolchildren are no longer loitering, and users of the park feel as if they can be in the park and enjoy themselves without worrying about something going wrong," said one woman who uses the park to take a break from her daily vending activities in the market district.

"The other day, a group of lesbians were fighting and, luckily, the police were there to stop them from hurting each other," said the photographer.

Private security guards are also employed to maintain order in the park and they also welcome the support from the police.

"Well, the police are doing their best in keeping things together and even though we, the private security in the park, don't even have a baton, we know that, as long as there is no loitering in the park, then the thieves don't have anyone to rob," said one security guard who asked not to be named.

"The police are here every day keeping things in order, and so are we," added the guard.

Superintendent in charge of the Kingston Central Police Division, Michael Scott, told The Gleaner that his team is determined to ensure order in the park.

"I must commend the men and women of the division, as they have been working hard. They are out there until 10 at nights making sure that things are safe for law-abiding citizens," said Scott who took charge of the division less than two months ago.

"We have made a number of arrests in and around the park and so we our aim is to focus on monitoring things as the hours between 2 p.m. and 5 p.m. and 7 p.m to 10 p.m are the hours when, robberies and other illegal activities take place.

"If we can make sure that our presence is felt within these hours, then we can be on top of things," added Scott as he appealed to the authorities to improve the lighting in the area around the Ward Theatre outside the park.

"We plan to keep things under control as long as we can and, if you notice, whenever you continue something, the moment you stop, it's like you never did a thing."

According to Scott, he is determined to ensure that the market district is safe to attract investors to the area. He said, in the time that he has been in charge of the division, there has been no reported case of extortion and he is urging business operators not to give in to these thugs, but to report to the police any demands by extortionists.