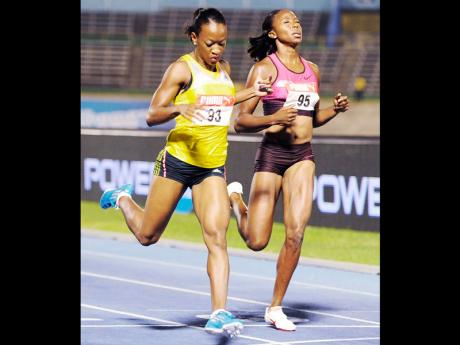 manage fourth in the 200-metre finals, Sherone Simpson was all smiles after completing her events.

The 29-year-old sprinter was banned earlier this year for 18 months because she tested positive for the stimulant oxilo-frine at the National Championships in 2013.

However, the Court of Arbitration for Sport (CAS) upheld an appeal filed by Simpson's attorney to suspend the ban pending an arbitration hearing in New York on July 8, thus clearing the way for her to compete at the championships this past weekend.

Also, she is looking forward to having her ban reduced at the CAS. She has no expectation, but she is confident.

"I have a lot of confidence going into the hearing on July 8 and just take it from there."

The 2006 Commonwealth Games gold medallist finished fourth in the finals of the 200 metres on Sunday afternoon and said it was good to be back.

"It feels awesome. I have to give God thanks. I am very happy that my first race back was at home and I am very happy for the reception I got. It was awesome," she said.

"I am just happy to be back competing and I just want to continue to compete and to get better."

Simpson's 11.34 seconds in the semi-finals of the 100 metres saw her just fail to qualify for the final and the 23.34 seconds was not enough to get her into the top-three automatic qualifying spots for the team to the Common-wealth Games coming up in July.

While Simpson may have been disappointed at missing automatic selection, she expressed gratitude.

"I am just thankful. From the first go I gave it my all and I am happy with how I ran. I haven't run in a year, I have to be thankful, but I know that once I can continue to compete I will get better."