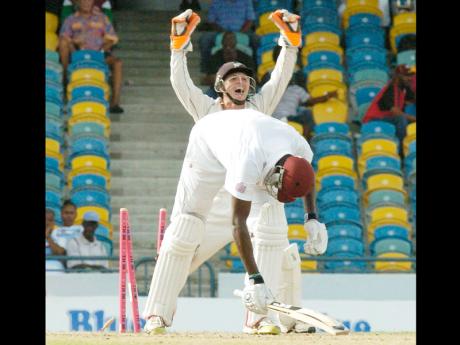 West Indies batsman Jason Holder bends over after being bowled by Mark Craig (out of photo), while New Zealand wicketkeeper B.J. Watling celebrates, during play on the fifth and final day of the Test cricket match at Kensington Oval yesterday. Holder scored 52. - Dellmar

West Indies crashed to a 2-1 series defeat yesterday after producing another inept batting performance to hand New Zealand a 53-run victory in the decisive third Test at Kensington Oval.

Set a challenging 308 for victory at the start of a rain-hit final day, the hosts lost wickets steadily and were dismissed at 4:50 p.m. for 254, when left-arm seamer Trent Boult removed Jerome Taylor in the third over with the second new ball.

When the Windies plunged to 144 for seven, 25 minutes before tea, it appeared as if the contest would be over before the interval, but debutant fast bowler Jason Holder stroked a top score of 52, inspiring a stand of 77 for the eighth wicket with Shane Shillingford, 30 not out, which frustrated the Black Caps.

Left-hander Darren Bravo scored 40, while captain Denesh Ramdin chipped in with 29 and

However, West Indies were undermined by seamers Tim Southee (3-28) and Boult (3-48), while off-spinner Mark Craig finished with three for 84.

New Zealand won the first Test at Sabina Park in Kingston by 186 runs inside four days, before West Indies levelled the series with a 10-wicket victory in Port of Spain.

For the visitors, it was only their second series win in the Caribbean and their second straight triumph, after beating the Windies last December on their turf.

Searching for a crucial victory, New Zealand declared at their overnight 331 for seven and immediately found success, grabbing three wickets in the morning session which was marred by rain.

In the third over, opener Kraigg Brathwaite offered no stroke to Boult and lost his off stump for six with the score on seven and Kirk Edwards rode his luck in scoring 10 before edging to Ross Taylor at first slip off Boult, to leave the Windies on 23 for two.

Southee then made the key breakthrough when he claimed dangerous opener Chris Gayle bowled for 11, after the Jamaican left-hander edged an attempted drive onto his stumps.

S Shillingford not out 30

Man of the match: Kane Williamson.

Man of the series: Kane Williamson.