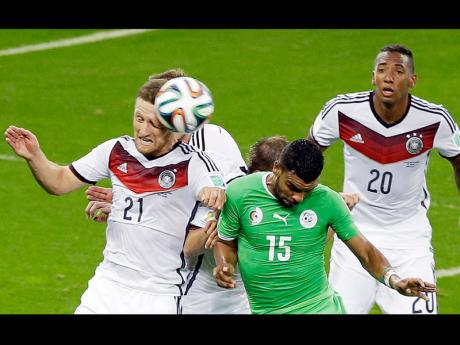 Germany's Shkodran Mustafi (left) goes for a header with Algeria's El Arbi Hillel Soudani as Germany's Jerome Boateng looks on during the World Cup Round of 16 football match between Germany and Algeria at the Estadio Beira-Rio in Porto Alegre, Brazil, yesterday. - AP

From a comically executed free-kick to the slapstick folly of the defence, a laughably disorganised Germany struggled mightily against a determined Algeria.

The Germans beat a team many had underestimated 2-1 in extra time yesterday to reach the World Cup quarter-finals for a ninth straight time.

But it was only after Thomas Mueller fell to the ground during a free-kick, and after the Algerians forced goalkeeper Manuel Neuer off his line and out of his area several times, that the Germans finally produced a stroke of brilliance early in extra time.

André Schuerrle backheeled in a goal in the 92nd minute, and then Mesut Ozil added another late in the match before the north Africans scored a consolation goal in the final seconds.

While it was Germany's first win in three matches against Algeria, the three-time champions will need more to overcome France in the quarter-finals.

There was little order and discipline in Germany's game in the cool conditions at the Estadio Beira-Rio. The team produced some chances, but also gave away many more than they normally do, and were lucky not to concede in a poor first half.

"We had major problems in the first half to organise the way we played," Germany coach Joachim Loew said. "Yes, we had our problems, but at the end, we were better and had a lot of chances. The important thing is to advance."

The statistics would make Germany look fully in control: 78 per cent possession, 16 shots on target for Germany against four for Algeria, a 22-7 edge on overall shots. But it was Neuer's unorthodox clearances that kept Germany in the match.

In other words, Germany were lucky.

With central defender Mats Hummels out with the flu, new man Shkodran Mustafi played as the right back, and the reshuffled defence looked so unstable that every Algerian counterattack put them under pressure. Mustafi ended up tearing his left hamstring muscle late in the match, and will miss the rest of the tournament.

But it wasn't just him. Normally reliable Per Mertesacker slipped while trying to clear a ball, allowing Algeria a big chance; and Jerome Boateng looked slow against the speedy Algerians.

Perhaps the most bizarre moment came in the 88th minute, with Germany about to take a free-kick from a good position. Bastian Schweinsteiger ran past the ball, then Mueller slipped before running over the ball in an attempt to get behind the Algerian defence, and finally Toni Kroos tried to chip it over the wall. But his effort was low and the Algerians easily cleared what could have been a good opportunity.

The Germans have been working on set pieces, according to Loew, but that one surely needs some fine-tuning.

"You don't have to play fantastic every match," Loew said. "You have to win."