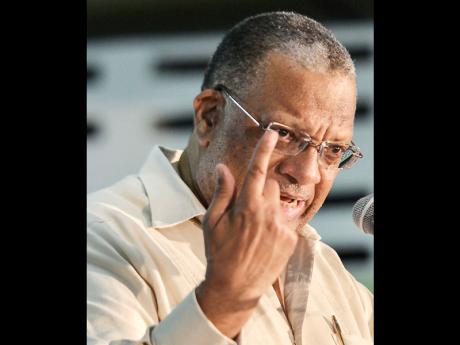 Days after Jamaica got a ringing endorsement from the International Monetary Fund's (IMF) top officials, Finance Minister Dr Peter Phillips and his debt management team took a chance on the international bond market, and got reception beyond expectations.

The ministry got record subscriptions of US$800 million. The coupon rate settled at 7.625 per cent, below the pricing range of 7.75 per cent to 8 per cent that the market had initially expected.

Bids on the notes actually rose to US$3.8 billion or more than four times the ministry's upsized debt-raising target.

The bond is priced to fully mature in about 10 years, in 2025, but the principal will be repaid in three annual tranches, starting in 2023.

Local pension fund managers and bond traders were bullish from early morning on the offering, which is now Jamaica's largest global issue. Among the current outstanding global bonds, the largest is the 2039.

Traders and analysts, with whom Wednesday Business stayed in contact throughout the day, said they expected an immediate impact on the appreciation of the Jamaican dollar due to the expected inflows of foreign exchange from the bond proceeds.

BNP Paribas and Citigroup were book-runners on the transaction which opened on July 1.

The US dollar-denominated bond was rated 'Caa3' by Moody's and 'B-' by Fitch and Standard & Poors.

Some of the proceeds will finance repayment of the Government of Jamaica's (GOJ) €150 million bond, which matures in October, refinance other debt, and fund new investments, said the GOJ-issued guidance sheet.

Rezworth Burchenson, managing director of Prime Asset Management Limited, said after the announcement of the US$800 million issue, that it was a vote of confidence in Jamaica's economic reform programme.

"The ability to raise US$800 million is a very positive signal to all stakeholders, indicating the confidence placed in the execution of our reform efforts. Certainly, the downward movement of the local currency will be halted, with the ability for a marginal appreciation based on the demand/supply relationship. Our fixation with the currency over the past 18 months will come to an end in the short term," Burchenson told Wednesday Business.

Bond trading manager with VM Wealth Management Limited, Denise Marshall-Miller, said early Tuesday that she was expecting take-up from pension funds and local institutions as well as interest from hedge funds, and tier-one and tier-two accounts in Europe and other countries in the West.

"I do believe it will be well received," Marshall-Miller said early in the day, even before interest in the offer had hit to the US$1.25 billion mark.

"The timing better compares to when they tried a year or two ago. Our accounts are in better standing ... we are maintaining the IMF agreement, we have passed four quarters, we have registered some growth, inflation is pretty much held under control, this will be favourable for an investor to decide if they need to invest. So I do believe the take-up will be good," she said.

"I would not be surprised if it is oversubscribed."

Local interest in the 2025 bond could not be ascertained immediately, but Marshall-Miller said Jamaican investors "usually" take up more than 50 per cent of external debt.

"Most of the debt is held by us in general. Pension funds, institutions will be invested in it. I would say over 50 per cent."

During her two-day visit, which ended last Friday, LaGarde praised Jamaica's adherence to its four-year external financing facility agreement with the IMF, and declared herself impressed with the inclusion of the private sector in the monitoring process under the Economic Partnership Oversight Committee.

On Tuesday, as the bond approached the 7.6 per cent pricing, Burchenson said Jamaica's current 2025 global bond was trading at 7.3 per cent.

He too had expected the current bond issue to perform well, saying: "It's hard to find attractive US dollar assets these days."

This 2025 instrument is a new issue and not a rollover of an existing bond, Marshall-Miller said.

The Ministry of Finance's Debt Management Unit declined comment on the offer, saying it planned to issue a formal statement later in the evening. That statement said the ministry had expected to raise US$500 million from the offer and that the 7.685 per cent price was the lowest rate achieved by Jamaica on an external bond.

Proceeds from the issue will be used to repay a €150 million bond maturing in 2014, refinance other indebtedness of the Government, and make new investments, the GOJ issued guidance sheet states.