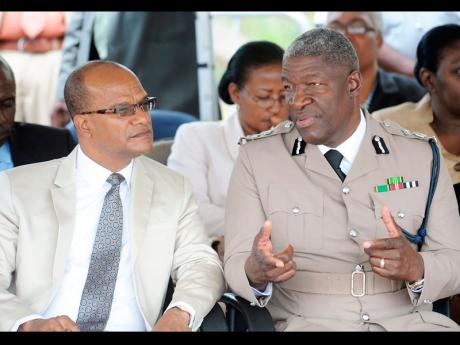 So Owen Ellington has retired as police commissioner with immediate effect. This decision comes 24 days before his 52nd birthday. It comes a full month shy of what would have been his 34th year as a member of the police force and four full years since his appointment as commissioner.

The decision also comes eight years before he reaches the mandatory retirement age of 60, as prescribed under the Amended Constabulary Force Act of 2002.

The Ministry of National Security said Ellington told it that "his decision to retire is based on the need to separate himself from the leadership and management of the force prior to the commencement of the upcoming commission of enquiry into the conduct of the operations of the security forces in western Kingston and other areas during the limited state of emergency in 2010".

According to the ministry's statement, Ellington said he "believes it (his retirement) will allow the Independent Commission of Investigations (INDECOM) to conduct its investigation into allegations of police-involved killings in the Clarendon Division without any perception of influence or interference on his part".

If any Jamaican believes these cosmeticised points put forward by the proud son of Glengoffe, St Catherine, I'd like to use the pages of this great publication to announce that I have a puss to sell them who can fight karate, impregnate a mule, and who claims fluency in three languages, including English.

Ask yourself these questions: What bolt of lightning would have struck a man who's widely loved by the men and women under his command; who, despite spikes in major crime under his watch, maintains the respect and admiration of the public; retire from a job which pays him a salary upwards of $8 million per year and an annual pension of $4 million for reasons that are, in essence, softer than the centre of a jelly donut?

Is it that at almost 52 years old, Ellington needs a new challenge? Is he undergoing a midlife crisis? Is he planning to now holiday in the Azores, tan himself on the beaches of Ibiza, or exile himself to the Isle of Patmos, where, like the Apostle John, he will be inspired to pen the modern-day version of the Book of Revelations?

Did the perceptive and intelligent Owen Ellington walk the plank? And did he make that move because said plank was set in front of him and he was given a choice between walking on it or surrendering some aspect of himself by a higher power? Recall that the higher power in this instance would be the national security minister.

Is it that the minister asked him to go? Did the minister propose retirement given that it would, at least on paper, allow Ellington to save face? Or did Ellington outline clearly the degree to which he would not bend on a certain issue and then offer this exit strategy to a minister he could no longer work with?

And without blaming the minister prematurely, was he, even if he was minded to continue working with the commissioner, prevailed upon by powers greater than he to make a decisive change at the most senior policy level in the constabulary?

The questions are myriad but the answers will be few. The minister has already washed his hands clean of the issue, saying the retirement owed nothing to prompting of any sort from his desk. He appeared to suggest that the country's international partners were falling all out of love with the police chief, but declined to oblige and connect the dots between their sentiments and Ellington's so-called retirement.

The question for the minister is, does he think the public believes him on this matter? And does it matter to him whether the public, his people, believe him or not?

The retirement of the gentleman, Owen Ellington, is a stunner. Despite failure under his watch, much good has been accomplished. The excuses for his retirement don't wash. I smell fish in the air.

And I believe that the other gentleman, whose name is prominent in the Bible and who happens to be a huge fan of fishy, is the active ingredient in this lather.

George Davis is a journalist. Email feedback to columns@gleanerjm.com and george.s.davis@hotmail.com.