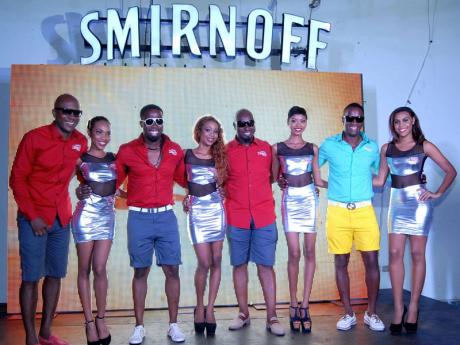 Dream Weekend promoters and the Smirnoff ladies at the recent launch of the party series.

One billion dollars! By any measure, one billion dollars is a lot of money, but that is what the Smirnoff Dream Weekend means to the economy of Negril and, by extension, the Jamaican economy.

Ten parties - Beach Rave, Twisted Spiritz, Beer Vibes, Yush, Daydreams, Xtreme Wet and Wild, Dream Miami J'Ouvert, Xclusive, Dream Live and Igloo - have been around as a block of parties for just about five years and as they continue to grow, so too will the value they bring to Jamaica.

Kamal Bankay, one of the promoters involved with the growing franchise that began in 2009, revealed at the recent launch of this year's 'weekend', that they have sold out tickets as far away as Samoa and Europe, and as close as Mexico. This broadening appeal, he said, has made the Dream Weekend arguably the best party in the Caribbean.

It has not gone unnoticed. "The event has served us well over the years. At the event you get the best of Jamaica's music, the selectors and our ability to put on great parties," said Clyde Harrison, the executive director of the Tourism Enhancement Fund (TEF), in what was a ringing endorsement of the 10-party marathon set for August 1-7.

The TEF is an agency that works in synergy with the Tourism Development Company and other relevant agencies to carry out the mandate of creating sustainable growth of Jamaica's tourism product. "We are proud to be a part of that. The number of visitors that this event brings to Jamaica is significant. The man said Samoa, he said Europe, he said all over the world. Now that's our business. We bring tourists to Jamaica, and if this event brings more visitors to Jamaica, we will always endorse it because they are doing a good job on our behalf."

That kind of activity has attracted many sponsors, including Smirnoff, Ting, the TEF, and media companies like The Gleaner.

Jermaine Bibbons of the title sponsors perhaps said it best as to why his company and others are willing partners. "One billion dollars pumped into the Jamaican economy. That is absolutely significant. One billion dollars, 10 amazing parties, the only place in the world where one weekend is made of six days. Who wouldn't want that every year? So Smirnoff is absolutely proud to be a part of these larger-than-life experiences, and the Smirnoff Dream Weekend is one."