TOK entertains at Beat & A Mic 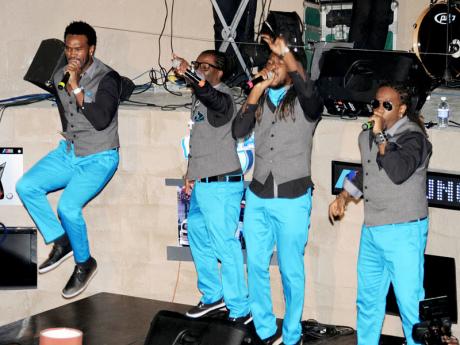 With more than a decade of songs to their names, dancehall group T.O.K entertained fans with their massive catalogue at Beat & A Mic last Saturday evening.

While Whitebones on Constant Spring Road in St Andrew did not have a lot of patrons, those in attendance got their fair share of entertainment from the very beginning of the event with Jay-Vibe doing an energetic song to start the show.

He made way for T.O.K to begin with Shell It Down on Major Lazer's popular 'Bumaye' rhythm. Quite swiftly, they went into some of their older songs like Money To Burn, Galang Gal, Gal Yuh A Lead and Like Gold. Although there was a focus on women, none answered the call to take the stage with them for a newer song called Show Me.

Still focusing on the females, the group did other songs like She's Hot and Shake Yuh Bam that had patrons dancing.

Sweating profusely on stage and with the heat on high inside the venue, T.O.K sang Summertime, which was originally done for a Tropicana advertisement. On two occasions during the show, they went back in time with Third World's Now That We've Found Love and Eric Donaldson's Land Of My Birth.

They sang against domestic violence with 'tears', but represented for the 'gangsters' with Man A Yaadie and No Man. Eagle's Cry, on the other hand, had patrons reminiscing and T.O.K disclosed that the 1999 song was their first number one song. Group member Alex also got his individual 'forward' when he managed to hit some very high notes during the song.

Later in the show, they moved on to some of their reggae songs like Footprint, Guardian Angel and When You Cry.

Having left the stage without doing a few of their popular songs, it was no surprise when they returned with Hands In The Air, Cree and Unknown Language.