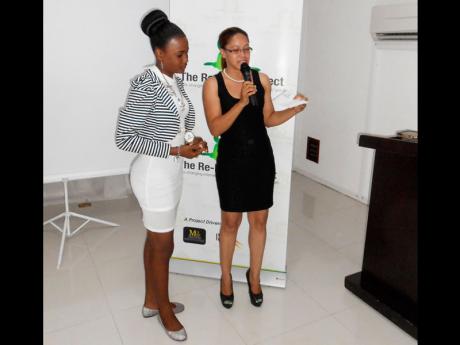 Alafia Adams (left) receives the Jamaica Public Service (JPS) award for Most Improved Child for her performance in the Re-Birth Project from Nathelie Taylor, manager of the JPS Foundation. - CONTRIBUTED

THE LAST words a mother would expect to hear from her child is 'I am going to kill you'. But that was one of the threats Alafia Adams hurled at her mother during one of their fierce arguments.

Kerry-Ann Ford said the struggles to deal with her young daughter were becoming unbearable and her death threat was the last signal that they needed help to repair their broken relationship.

"She would not listen to me, no matter how much you talk to her. She just didn't care. We would argue about the simplest things, and she would shout after me, and just want to do her own thing," the young mother said.

Ford said the day Alafia first threatened her, she did not take her seriously, but then her daughter's behaviour, which included associating with the wrong company and staying out beyond curfew, fuelled her fears that something could go terribly wrong.

For Alafia, like many other 15-year-old children, she had her own teenage battles dealing with, and her mother's protestations were the last thing she wanted to deal with.

"I never did interested in anything. I just feel like she wanted to stop me from living my life, and I never have any time for her or anything she said," Alafia explained.

At their wits' end, they were introduced to a project which they said, in nine weeks, was able to transform their relationship.

Developed by a team of marketing and communications specialists at the firm MC & Associates, the Re-Birth project had, at its core, the role of parental involvement in children's success.

Speaking at the project's closing ceremony, last Sunday, Melody Cammock-Gayle, co-founder of Re-Birth Project and director at MC and Associates, said the $2.2 million undertaking was only made possible through donations from corporate companies and unpaid facilitators who saw the need for such a programme.

"We now can only pray that all the actionable, practical coping strategies, helpful, valuable information and techniques will facilitate [their] successful negotiation of high-risk environments," Cammock-Gayle said about the project participants.

Alafia, a Tivoli Gardens High School student, said as a result of the lessons learnt through the project, she now recognises that the threat delivered to her mother came from a place of anger and she has now resolved those feelings.

Her mother heaped high praises on the intervention programme for saving their relationship.

"Before Re-Birth, she had no respect for me, but now I realise that we both said things that we should not have. Now, she is more obedient and I listen to her a lot more now," Ford added.