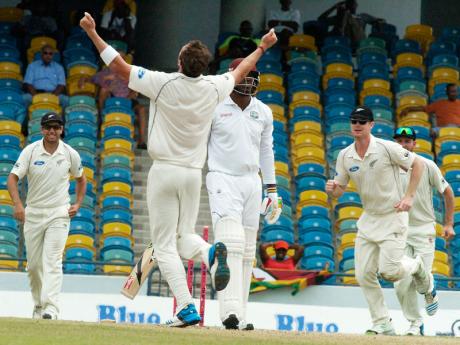 New Zealand's Tim Southee (back to camera) celebrates as his teammates react, after bowling West Indies opener Chris Gayle (centre) during the fifth and final day of their Test cricket match at Kensington Oval on Monday. Gayle made eleven. - Dellmar

Captain Denesh Ramdin has scolded front-line batsmen on the West Indies team for not transforming their starts into substantial scores during the third and deciding Test match against New Zealand, which ended on Monday.

An inept batting performance by the regional side aided New Zealand to a 53-run victory as West Indies were bowled out for 254 at Kensington Oval.

Ramdin has accused the top-order batsmen of squandering their starts as the Black Caps prevailed 2-1 in the series.

"In the first innings, all our top six, seven batters got starts and nobody went on to make that big hundred. It is all in the mindset, the way we apply ourselves," Ramdin said.

The Trinidad and Tobago wicketkeeper has appealed to senior players to improve their performances as a way of supporting the efforts of junior players, spelling more success for the regional side.

Jermaine Blackwood and Jason Holder scored half centuries on their debut matches during the series, while a century from Kraigg Brathwaite in the second Test helped West Indies to square the series.

"There were a lot of challenges along the way and a lot of positives as well. Young (Jermaine) Blackwood, Jason Holder, Kraigg Brathwaite, those guys coming in and getting runs for themselves ... Hopefully, they can go from strength to strength and the senior guys can pull their weight a bit more. That will augur well for the team," said Ramdin. "Test cricket is a lot of hard work, and if you go out there and work hard, you get the rewards for it. Hopefully, this can be a stepping stone for some of the guys who did well. All the guys who didn't, it should be a wake-up call for them to do well in the future."