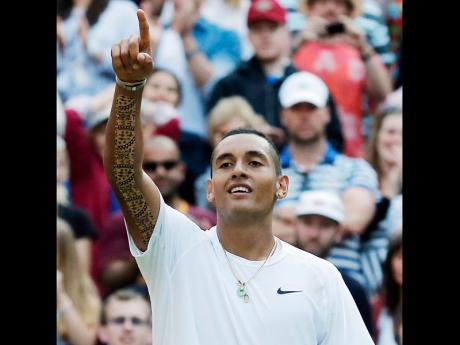 Rafael Nadal ran out of comebacks at Wimbledon, losing to a brash, big-serving, between-the-legs-hitting 19-year-old kid who might just be a future star.

Maria Sharapova somehow seemed on the verge of a turnaround despite a flurry of unforced errors, saving six match points before finally succumbing on the seventh with - what else? - a missed shot.

And in the most striking sight of a memorable day of departures by past Wimbledon champions, Serena Williams couldn't get the ball over the net in a doubles match with her sister Venus, stopping after three games because of what was called a viral illness.

"I was in a bit of a zone out there," said Kyrgios, the lowest-ranked player to beat the No. 1 man at any Grand Slam tournament in 22 years.

"You've got to believe you can win the match from the very start and I definitely thought that," the 6-foot-4 (1.93-metre) Kyrgios said. "I'm playing some unbelievable tennis on the grass."

Playing in only his fifth major tournament - he got into the field thanks to a wild-card invitation - Kyrgios (pronounced KEER-ee-os) is the first man to reach the quarter-finals in his Wimbledon debut in 10 years. He's also the first teenager to defeat the top-ranked man at a Slam since Nadal was 19 when he beat Roger Federer at the 2005 French Open.

Nadal dropped the first set in each of his previous three matches before coming back to win. When he took the second set yesterday, though, Kyrgios stayed steady.

"Kyrgios is young; he has nothing to lose," said Nadal's uncle and coach, Toni. "It's like when Boris Becker won here. He was 17 and had a very good serve. He could beat everyone because of his serve. It's the same with Kyrgios. He plays aggressively and without any doubts."

Today, Kyrgios faces No. 8 Milos Raonic of Canada, another man never before this far at Wimbledon. The other men's quarter-finals: seven-time Wimbledon champion Roger Federer against good friend and Australian Open champion Stan Wawrinka in an all-Swiss matchup; defending champion Andy Murray against No. 11 Grigor Dimitrov; and 2011 champion Novak Djokovic against No. 26 Marin Cilic.

The women's quarter-finals today: No. 3 Simona Halep against 2013 runner-up Sabine Lisicki and No. 9 Angelique Kerber against No. 13 Eugenie Bouchard. The semi-final on the other side of the draw was established yesterday: 2011 champion Petra Kvitova against No. 23 Lucie Safarova.