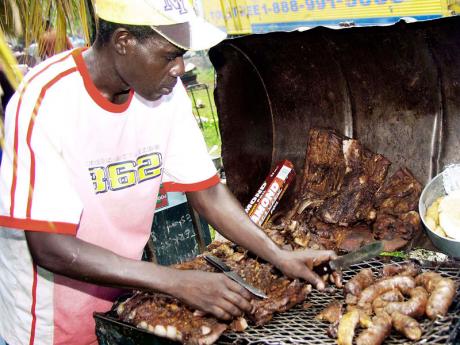 Gilbert Hall of Honest John Boston Jerk, seen here in 2006, is a regular pan-chicken man at the Portland festival.

With the cancellation of this year's Portland Jerk Festival becuase of a combination of factors, businessman Colin 'Shaka Fame' Bell has stepped in to fill that void with the staging of the Boston Jerk and Musical Festival slated for Sunday, July 6.

The food festival, which will be held at the Boston Community Centre, is billed as a family-oriented event, with special emphasis placed on providing entertainment throughout the day for the entire family, along with the preparation of tasty meals and other delicacies.

"We cannot break the trend," commented Bell. "Portland has had its own festival and, therefore, there is no way I could sit by and allow this blessed parish not to stage its annual festival, which is a calendar event. I have taken the initiative to host this festival, and it is only for this year, with the hope and belief that the Portland Jerk Festival will return next year. Thousands of persons, including vendors, supermarket operators, bar operators, butchers, along with those directly employed to the festival, have benefited over the years. This is a festival that the entire country looks forward to," he added.

Bell says since the festival moved from Boston to Port Antonio in 2004, it has lost its community spirit. He says it was always his intention to have the festival return to its birthplace, which has been realised this time around.

The organisers of this year's Boston Jerk and Musical Festival are optimistic about the event, which they believe will be a huge success, as the festival will be returning to its birthplace.

In addition to this, Bell said: "There will be a kiddies village with many attractions, including water slides, ferris wheel, bounceabout, mechanical bull and merry- go-round. Poinciana Park and the Boston playing field will accommodate parking. The cost is $800 for adults and $200 for children. The entertainment will also include the likes of George Nooks, Nezbeth, Bushman, Fab 5, Hezron, Lukie D, drumming and kumina. It is a day event and we begin at 10 a.m., and close off at 8 p.m. The jerked meals will include rabbit, deer, pork, chicken, lobster, shrimp and goat."