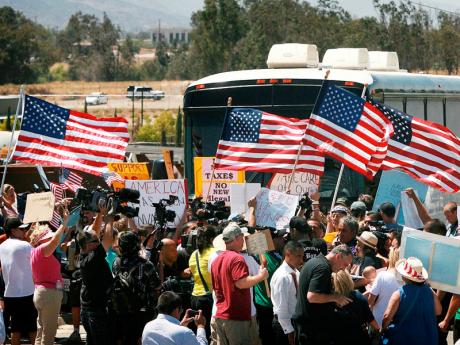 Protesters turn back three buses carrying 140 immigrants as they attempt to enter the Murrieta US Border Patrol station for processing on Tuesday.

US Homeland Security buses carrying migrant children and families were rerouted Tuesday to a facility in San Diego after American flag-waving protesters blocked the group from reaching a processing centre.

The stand-off in Murrieta came after Mayor Alan Long urged residents to complain to elected officials about the plan to transfer the Central American migrants to California to ease overcrowding of facilities along the Texas-Mexico border.

Many protesters held US flags, while others held signs reading "stop illegal immigration," and "illegals out!"

Many of the immigrants were detained while fleeing violence and extortion from gangs in Guatemala, El Salvador and Honduras.

More than 52,000 unaccompanied children have been detained after crossing the Texas-Mexico border since October in what President Barack Obama has called a humanitarian crisis. Many of the migrants are under the impression that they will receive leniency from US authorities.

After the buses in California were blocked, federal authorities rerouted the vehicles to a freeway and then to a customs and border facility in San Diego within view of the Mexico border.

The three buses were trailed by a half-dozen news crews during the two-hour trip. People near the San Diego facility were surprised by the caravan.

Juan Silva, 27, a welder in Chula Vista, said he thought officials were transporting drug traffickers. Then he heard the buses were carrying migrant families.

"I don't think people in that town should be against little kids," he said about the protesters in Murrieta. "We're not talking about rapists. We're talking about human beings. How would they feel if it was their kids?"

After the migrants are processed, Immigration and Customs Enforcement will decide who can be released while awaiting deportation proceedings.