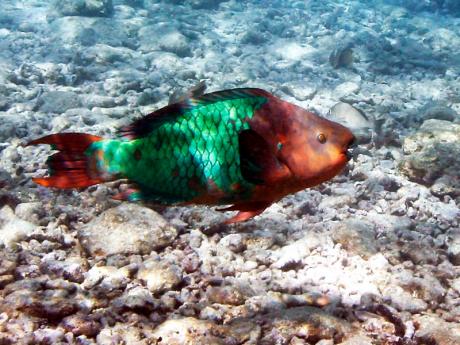 In this file photo, a parrotfish is shown swimming over a dead coral reef in the Florida Keys National Marine Sanctuary near Key West, Florida.

Colourful parrotfish and spindly sea urchins are the key to saving the Caribbean's coral reefs, which may disappear in two decades if no action is taken, a report by several international organisations said yesterday.

The report, which analysed the work of 90 experts over three years, said Caribbean reefs have declined by more than 50 per cent since the 1970s. It said that while many experts have blamed climate change for the problem, a drop in the populations of parrotfish and sea urchins is largely responsible.

Parrotfish and sea urchins feed off seaweed, and a drop in their numbers has led to an increase in seaweed, which smothers coral reefs, Jeremy Jackson, lead author of the report, said.

"The situation is truly horrific in the sense that you have all these places that are desperately overfished," Jackson said in a phone interview from Australia.

He said the main culprits in reef degradation are overfishing, coastal degradation and diseases introduced to the region.

"Climate change for me so far is 10 per cent of the story," said Jackson, a senior adviser with the Swiss-based International Union for Conservation of Nature, which issued the report with the United Nations Environment Program and the Global Coral Reef Monitoring Network.