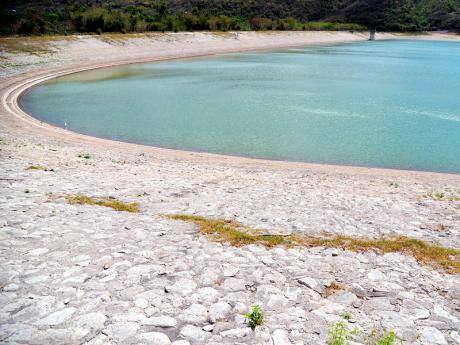 The Mona Reservoir showing the severe drop in the water level.

Minister of Water, Land, Environment and Climate Change Robert Pickersgill said in the House of Representatives yesterday that the below-average rainfall being experienced and the impact it has had on water-distribution systems "is an islandwide challenge bordering on a crisis".

"We are appealing to persons to conserve on their use of water during this critical period. We will be adopting a zero-tolerance approach to certain activities, and so, I have instructed the National Water Commission (NWC) to issue a prohibition notice by this weekend on the washing of vehicles, the watering of lawns and filling of swimming pools, among other activities," Pickersgill said.

"Persons who are found to be in breach of the prohibition will be taken before the Resident Magistrates' Court and may be directed to pay a fine," the minister added.

Under the law, the NWC has the power to issue prohibition notices during times of drought. Any person who contravenes the law is guilty of an offence and liable on summary conviction before a Resident Magistrate, to a fine not exceeding $1,000 or in default of payment, to imprisonment for a term not exceeding 30 days.

"We are in a crisis; this is nature; this is global warming and each of us should cooperate," ACP Novelette Grant told The Gleaner yesterday.

Level of Fine not important

She said the level of the fine is unimportant, arguing that when water is wasted in times of drought, no amount of punishment can replace the precious commodity.

"We need to get people to that level of awareness that we don't continue automatic behaviour," Grant said, while adding that the police force was "capable and prepared to enforce the law" should the prohibition order come into being.

"This is not one of those times we should ignore what we are being told," the senior cop said, while adding that she has been witness to the low levels of water in the Mona Reservoir.

Pickersgill said yesterday the amount of rainfall that was expected during May and June, which traditionally are rainy months, did not materialise.

"The amount of rainfall we received islandwide fell below the 30-year average for what is normal at this time of year, and was not enough to make up the deficit of the dry season between December 2013 and April 2014," Pickersgill said.

"Based on the most recent figures from the NWC, storage levels at the two largest reservoirs, the Hermitage Dam and the Mona Reservoir, are at 83 per cent and 37 per cent, respectively, and are falling daily," Pickersgill added. He noted also that the Hermitage Dam is heavily silted, and only about 30 per cent of its design capacity is usable.

With this year projected to be the hottest year on record, Pickersgill said the meteorological projections are troubling.