Blake back in Lausanne's fast lane 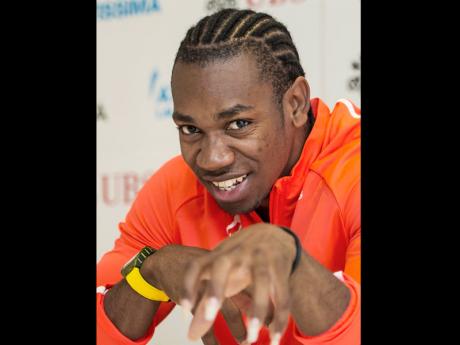 The 2011 World Champion will be doubling the distance this time around as he returns to one of his favourite IAAF Diamond League stops, where he is set to line up in the 200m alongside compatriot Nickel Ashmeade, one of three men below 20 seconds this season; Frenchman Christophe Lemaitre; Alonso Edwards; and Jaysuma Saidy Ndure.

A lot of the attention should surround Blake, who will be looking to make up for a poor start that cost him a win at the adidas Grand Prix in New York a few weeks ago.

However, unless Blake can produce something truly special, it's Tyson Gay's return to the track and his clash with Justin Gatlin that is expected to dominate the headlines.

Gay will be competing for the first time since failing a drug test and subsequently receiving a one-year retroactive suspension by the authorities.

Gatlin, who also served a ban for doping, is undefeated in his eight 100m starts to date and is responsible for four of the five fastest times over the distance, with his season's best standing at 9.86 seconds.

The race also features Jamaican Kemar Bailey-Cole, who is yet to find consistency after showing glimpses of real class that led many to label him the next Usain Bolt. His season best is 10.06 seconds and personal best 9.93 seconds.

Recently crowned national champion Andrew Riley will be looking to make up some ground on the Diamond race front when he lines up against a strong field in the 110m hurdles.

Veronica Campbell-Brown has pulled out of the women's 100m because of what her management team calls a "minor setback", while Michael Frater continues to work his way back with an assignment in the men's 100m B race, where he will come up against Briton James Dasaolu.

Olympic champion Kirani James and World Champion Lashawn Merritt will renew their rivalry in the 400m. James won the last face-off in Eugene, bucking a three-race losing streak to the American and the pair, who have both gone below 44 seconds this season, will be encouraged by the presence of sub-45 seconds club members Chris Brown, Lalonde Gordon, Kevin Borlee, and Youssef Masrahi.

Attention should also be focused on the men's high jump, where 2.42m men Bogdan Bondarenko and Mutaz Barshim, as well as Ivan Ukhov (2.41m), will take another shot at Javier Sotomayer's 2.45m world record, which is just over a month away from its 21st anniversary.