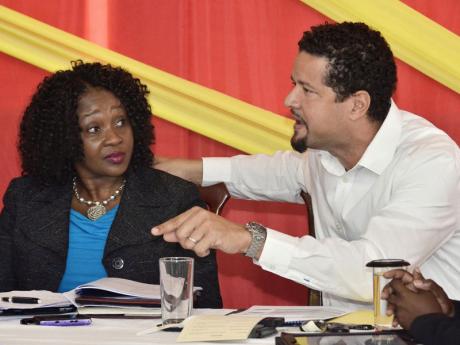 President, Jamaica Securities Dealers Association, Julian Mair (right), makes a point during a domestic market stakeholders' meeting hosted by the Ministry of Finance and Planning's Debt Management Branch at the ministry's Heroes Circle offices on May 14, 2014. Acting principal director for the debt unit, Dian Black, is at left. - JIS Photo 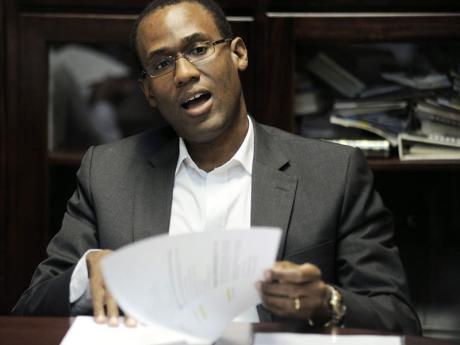 The Bank of Jamaica (BOJ) insists there is no danger of a systemic liquidity problem within local financial markets, saying deposit-taking institutions (DTIs) have adequate cash reserves and sufficient mechanisms to trade in government securities.

Its assurance comes amid concerns raised in the Senate by Opposition Senator Dr Nigel Clarke, during passage of the new Banking Services Act in mid-June, of a significant problem of illiquidity, especially surrounding the fixed-income market, and a need to reassess the conditions.

It later emerged that the network of securities dealers, too, are dissatisfied with the mechanisms that the BOJ has created to flow cash to the financial system, saying they are largely left out of the process.

"Institutions that hold GOJ debt securities, particularly locally denominated GOJ securities, currently have a difficult time selling these securities. Sometimes bids exist, but these are usually for small quantities and in other instances offers fade at execution time," Senator Clarke told the Financial Gleaner in a further clarification of his position enunciated in Parliament.

"The financial system remains at risk while a large proportion of the assets of deposit-taking institutions, especially those assets designed to be liquid, are in effect illiquid," he said.

While, he noted, that an illiquid market for government securities is to be expected after a major debt restructuring, voluntary or otherwise, the conditions have persisted too long after the National Debt Exchange, which was executed in February 2013.

It was the second such debt swap in three years.

"Of particular concern is the duration of this period of illiquidity - it has lasted for almost 18 months now - and the connection between illiquidity and other economic ills," he said.

Clarke, who is a top executive in the privately held conglomerate Musson Group and is chair of one of the group's investment companies, Epply Limited, said were the tightness of money flows to persist, it could result in uncertainties around pricing and valuation of GOJ debt securities, which itself undermines confidence.

"Doubts about solvency cast a long shadow over medium-term prospects. It inhibits the ability of financial institutions to commit capital to productive activities. In addition, it heightens the risk profile and outlook of financial institutions and, as a result, those responsible for credit decisions naturally reassess underwriting requirements, and this curtails access to credit," he said.

"It introduces a vicious cycle whereby uncertainty in pricing and valuation leads to further illiquidity, as market participants are reticent to transact at the 'wrong' price in the 'dark'," Clarke commented via email.

The network of commercial banks previously went public with similar concerns in September 2013 and again in March 2014, saying BOJ's clampdown on liquidity had curtailed capital for lending.

It emerged this week that the Jamaica Securities Dealers Association (JSDA) has written a position paper on the issue - which it declined to share with the Financial Gleaner.

JSDA President Julian Mair said on Wednesday that arrangements made by the central bank to improve liquidity levels is of little help to primary and secondary dealers, whose welfare, he says, are more critical to the health of the entire capital market.

Mair said the JSDA acknowledges the efforts being made by the central bank - that is, the creation of mechanisms to flow cash to financial companies as needed - but said such efforts are chiefly targeted at the banking sector, which the BOJ regulates, and not securities dealers, which are policed by the Financial Services Commission.

"The market is driven by those licensed and mandated with the trading of securities, which is the securities dealers sector and the subset of primary dealers. None of these directly benefit from the measures introduced by the BOJ," Mair said.

The DTIs, up to March, held $255 billion of investments, the majority of which are GOJ securities.

Asked to weigh in specifically on Nigel Clarke's Senate comments, the BOJ said via email last Friday that there are no systemic issues, having reproduced its list of mechanisms through which it can funnel cash to the needy.

The central bank also said the overall regulatory framework governing liquidity requirements was sound and that the system does facilitate use of GOJ benchmark investment notes as collateral.

"In response to a few instances of tight liquidity conditions since the second half of 2013, the bank has enhanced its liquidity framework by providing multiple points of easy access to Jamaican dollar liquidity for DTIs," the BOJ said.

These include its Repurchase Operation, whereby bids for specific quantities of liquidity are invited by the BOJ from DTIs on a bi-monthly basis; the Standing Liquidity Facility, introduced in December 2013, where DTIs have automatic access to overnight liquidity from the BOJ; the six-month repurchase operations or SMRO facility, which is also targeted at the banking system.

These facilities are supplemented by the bank's "outright purchase of GOJ benchmark securities from DTIs," BOJ said.

The BOJ made the point that local institutions are by no means under threat, that there was "ample liquidity in the financial system to satisfy normal business needs", and that it would continue to police conditions in both the domestic money and bond markets to ensure their smooth functioning.

Commercial banks and near banks are currently required to park a minimum 26 per cent of liquid assets with the central bank, of which a minimum 12 per cent is to be held in cash reserves at the Bank of Jamaica.

For building societies, the requirements are five per cent liquid assets and one per cent cash. However, the mortgage sellers become subject to the same reserve ratios as the banks if they fail to meet the prescribed 40 per cent threshold of residential mortgages to saving funds.

To back its argument, BOJ said the DTIs "consistently" meet their reserve requirements.

The central bank itself also "serves as the liquidity backstop to ensure that stability of the financial system is maintained," BOJ told the Financial Gleaner.

As to one of the concerns raised regarding trading mechanisms for GOJ bonds, the central bank said the platform being created for the purpose by the Jamaica Stock Exchange (JSE) was put on hold by that institution pending the finalisation of ongoing reform in the securities market.

Clarke says GOJ securities comprise the single largest block of assets in the banking system, "and rightly so, as these ought to be the most liquid form of assets that such an institution holds".

The banking system is valued at $1 trillion in assets.

He proffers as one solution the implementation of the electronic platform that was agreed to two years ago for trading fixed-income securities, which he said would grow the pool of buyers and sellers, facilitate an increased number of trades and pull more liquidity into the system.

The BOJ and the JSE signed an agreement for the creation of such a secondary market through the JSE platform in 2012, he said.

However, JSE General Manager Marlene Street Forrest said the project was put on hold because of the low level of interest in JMD government securities at this time, but that other products are being looked at for development and trading.

"The consensus is that while it is a priority, given the fact that the activity in government securities at this point is not as high as it used to be, the priority has sort of shifted somewhat," said Street Forrest.

"What is being worked on now is some other mechanism for products - meaning possibly products in terms of collective investment schemes, etc - which will eventually be traded on a platform, but first they are looking at strengthening some of the regulations and the mechanisms," she said.

Mair, who sits as a director on the JSE board, said other mechanisms can be found for trading securities, while Clarke notes that a follow-through on the project could deliver a shot of market confidence.

"Having a mechanism that allows for GOJ debt securities to be traded on an open platform such as the JSE would bring transparency to pricing. The market price would be established by competitive activity that would be visible to all participants and such transparent price discovery would boost liquidity," the senator said.

"Furthermore, liquidity becomes its own virtuous cycle as participants are more willing to purchase/sell if they have confidence that a market exists where they can sell/purchase when they want."