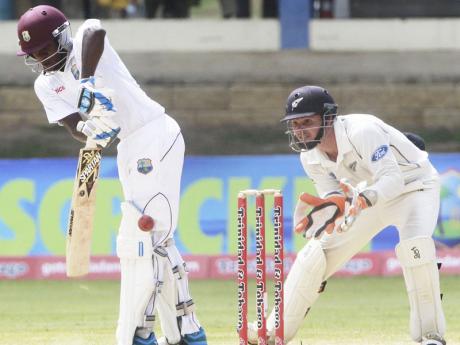 I had planned to write about World Cup football, but the folly that went on in the last Test match between the West Indies and New Zealand must be exposed. I have seen our cricket administrators do stupid things before, but the most recent game must rank as the most brainless decision-making in the modern era.

West Indies whipped New Zealand by 10 tickets in the second Test in Trinidad and Tobago. We dominated the game from start to finish. There were two centurions, and Jermaine Blackwood made a good start to his Test career with a mature 63. For reasons that are not entirely clear, those in charge decided to drop Blackwood for the third Test and play the extra bowler.

The move was cruel on young Blackwood. I don't care how it was communicated to him, but the youngster must have been wondering what justice is there in the world. He kicked down the door for selection by piling up a bag of runs in his last few first-class games. He got into the Test team and did brilliantly and was told that he wasn't good enough for the next game.

My grandmother used to talk about retribution, her way of saying that the gods had a way of punishing those who act unjustly. That third-Test loss may well have been retribution. The move backfired, as I was half-expecting it would. New Zealand won the game and the series and left the regional cricket bosses with egg on their faces, that is, if they still have the capacity to be embarrassed about anything.

Best teams of all time

Those of us who follow cricket know that the two best Test teams of all time were the marauding West Indians of the 1980s and the Australians under Steve Waugh close to the turn of the century. They had one thing in common. They picked their six best batsmen, a wicketkeeper who could bat, and their four best bowlers. That did the business, and all other Test teams that have had any kind of sustained success have followed the same blueprint.

Yes, some teams have all-rounders, but if you check keenly, all the all-rounders could make the team comfortably in one department or other and the other skill became a bonus. Why the experiment to choose five bowlers, especially after the resounding success in the Trinidad game?

What makes the move even more strange is that if there is one venue in the region that you would say is favourable to fast bowling, that would be Kensington Oval in Barbados. And yet, it is here that the powers that be chose to play two spinners. Shillingford went wicketless for more than 130 runs. Shillingford had taken five wickets in Jamaica and had looked as good as any of the bowlers. He was unfortunately dropped for the next game. To bring him back in the third Test showed clearly that here are decisionmakers who are confused.

Shillingford went for 130-plus runs. It is the worst return he has had in Test cricket. Maybe he, too, was confused, or maybe the cricket gods were trying to tell those who made that decision that they will show them up for their folly.

One of cricket's clichés is that bowling wins matches. I have argued long and hard against that. What wins matches is a combination of runs and wickets. When we bowled out New Zealand for 221 in the first innings of the Trinidad Test, we piled up 460 in reply. That massive 200-plus lead was priceless, and went a far way to help us win the game. With a 200-plus-run deficit, New Zealand knew they couldn't win, and a team that knows it can't win a game often plays with less resolve. Clearly, those who chose the team for the third Test didn't appreciate the part runs played in that victory. We lost the game by 53 runs. The 63 that Blackwood made in the previous Test would have come in handy!

Ottis Gibson's job as coach must now be hanging by a thread. Sports is a result-oriented business and our results in the last year and a half to two years shows a team going nowhere. New Zealand winning a Test series against West Indies in the region should be enough to give Gibson his walking papers, especially with the silly selection policies that cost us that third Test.

Orville Higgins is a sportscaster and talk-show host with KLAS ESPN FM. Email feedback to columns@gleanerjm.com.