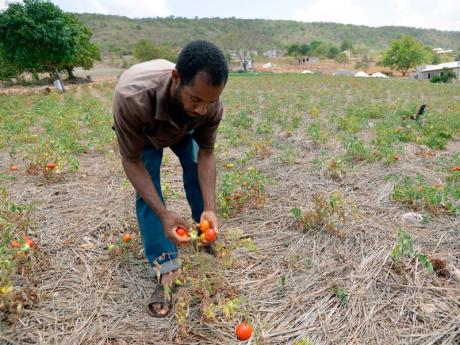 A dejected Clive Edwards shows The Gleaner his drought-hit tomato field that he abandoned because he was unable to purchase water at the going cost.

Long before Water, Environment and Climate Change Minister Robert Pickersgill's announcement on Wednesday that Jamaica's water resources were at crisis level, farmers in the country's breadbasket parish of St Elizabeth were reeling from the economic fallout of one of the longest droughts in recent memory, as they tried in vain to grapple with crop failures.

This harsh reality was reflected in row upon row of parched tomato plants, withered bell pepper seedlings and wilting melon vines in Junction, Ballards Valley, Southfield and Flagaman. A Gleaner news team visited the communities and encountered farmers who, for the most part, admitted that they were fighting a losing battle against the elements.

Farmers from southern St Elizabeth have a well-earned reputation of achieving against the odds, consistently producing enough melon, tomato, scallion, thyme and bell (sweet) peppers to supply the rest of the country. In a region starved of water over the years, they have long mastered the art of mulching - covering the soil with grass in order to reduce moisture loss, while enriching and protecting the soil. Now, despite their expertise, these masters of this art are fighting a losing battle against an enemy they cannot beat.

The impact of the drought has been made worse by consistently strong winds, which dry out the soil faster than it can be replenished - an unanticipated and very costly effect, for which the farmers have no solution.

"You wet it now and by tomorrow it gone, come in like it never wet," 35-year-old Clive Edwards told The Gleaner, pointing to a tomato field of bearing plants which he was forced to abandon just as they were coming into bearing, because he couldn't afford the cost of water to keep them alive. After spending between $40,000 and $50,000 on inputs, he had anticipated a return of about $400,000, but will reap nothing from his hard work.

NEED TO GET BACK UP

"It kinda set me back now, because the money nuh really deh deh fi start back over right now, but me haffi go find a way fi start back again. Probably hustle around and get some money and start back. You can't give up, you know. Nuh have nuh choice so you have to try and try," he lamented.

Meanwhile, a thriving tomato and cabbage crop located nearby and belonging to Oraine Davidson was of little comfort to the 21-year-old farmer, who owns a truck and so was able to access more affordable and available water. Pointing to two containers in the vehicle with a combined total of 500 gallons for which he paid $500, explained that it would cost him $3,000 to have someone deliver the water.