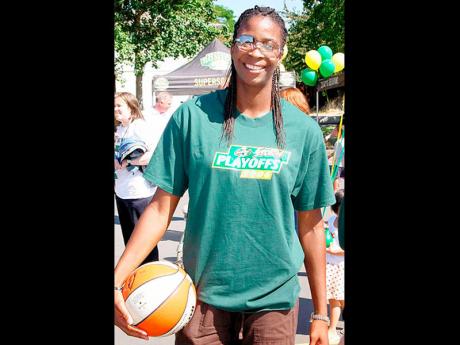 Head coach of Jamaica's female basketball team, Simone Edwards, says her squad is in desperate need of $3 million to send the national squad to this year's staging of the Caribbean Basketball Conference (CBC) competition, which will be held in the British Virgin Islands (BVI) from July 8-12.

Edwards, a former Women's National Basketball Association player in the United States, told The Gleaner yesterday that the overall cost to send the team to the BVI is $5 million, but if they are able secure at least $3 million, they will be on the plane to the BVI.

"Overall, we need $3 million for the travel and hotel for the players and coaches, but we actually need about $5 million overall because we are short of a few stuff," said Edwards.

"Right now, I just want to get the team there and so I am just saying that if we get at least $3 million, I am sure that my team will be at the tournament," she said.

The Jamaicans are drawn in Group B of the championships alongside arch-rivals Trinidad and Tobago, Guyana and St Vincent and Grenadines. The top three teams from the CBC will advance to the Centro Basketball Championships, which will be is slated for Mexico from July 22-26.

Jamaica's team includes Jennifer George and Shennieka Smith, who were both drafted in the WNBA in 2013 by Indiana Fever and New York Liberty, respectively.

Edwards added that with the depth and experience in the national team, she is confident that they will advance to the next phase of the championships.

"The training has been going well because we have put together a bunch of girls that haven't played together. Now to get the chemistry going ... I am just trying to get these players to learn the plays and play together as a team," Edwards said.

"I am sure we can advance from this group, but Trinidad are very tough. However, I am sure that we can come out of this group," she said.

"I have two players that have been drafted into the WNBA and they have been to training camp, and I have players who have been playing overseas and then I have the best local players," Edwards pointed out.