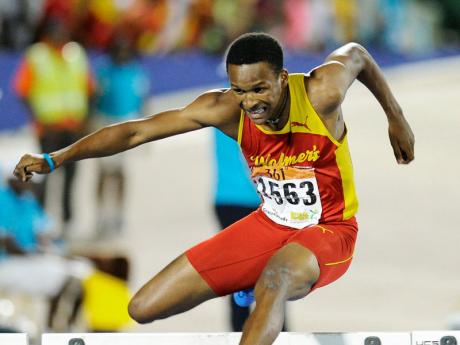 A year ago, Jaheel Hyde went into the World Youth Championships with little training for the 110-metre hurdles and stunned the world with a golden performance in Donetsk, Ukraine.

He gave the country its first gold medal in the 110 metres hurdles after winning in a then world leading and championship record 13.13 seconds despite competing against a negative wind of 1.1 metres per second.

Fast-forward one year later and Hyde will be going for another major title. In less than three weeks, he will compete at the World Junior Championships in Eugene, Oregon, where he will try to add the 400-metre hurdle title to his resume.

The Wolmer's Boys athlete is very confident that he can strike gold in Oregon and is happy to be back in full training for the meet.

"I had a little setback earlier as I was concentrating on my studies as I was doing my CXCs, but I am happy to be back in training, and although not at 100 per cent yet, I am getting there as I have a few weeks to go," said Hyde.

Unlike a year ago when he was not among the favourites going into the Championships, this time around, Hyde is the man to beat as his personal best of 49.49 seconds has him atop the IAAF World Junior list in the event.

Hyde is under no pressure to deliver despite being the number-one man in the event with his National Junior record.

"I am under no pressure going into the championships as I am very confident and I know I can go faster," he said.

Tim Nelson of the United States is just behind Hyde with 49.90, but Hyde is not worried about the home town boy.

"Competing in Oregon is like running on any other 400 metres track in the world, and it does not matter who I run against," said Hyde.

"I have no regrets. I think I am a better athlete going over the 400-metre barriers," said a confident Hyde.