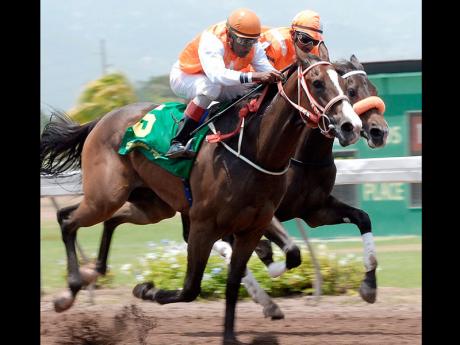 With the fancied horses falling like ninepins at Caymanas Park at the June 29 Sunday meet, the Pick-9 eluded punters to the extent that the consolation prize was paid to only 13 punters with six of nine.

Upsets by KERRY DANCER at 44-1 in the eventful seventh race, SUB STRUCTURE at 13-1 in the first, STEP IT UP at 5-1 in the Sport Journalists of Jamaica Trophy co-feature,and SINK THE BISMARK at 6-1 in the nightpan.

We look at the first Super-6 for native bred maiden two-year-olds to be contested by six starters over 600 metres straight. Owner/trainer/breeder Lorenzo Robinson will saddle as many as four runners, including top contenders KESTEEN and GOLD SCREW to be ridden by Paul 'Country' Francis and Dick Cardenas respectively.

Both have performed well in two races so far, KESTEEN losing narrowly to the favourite LADY DANZA over the distance in the Eddie Black Memorial Cup last Saturday, and is given the edge on the strength of that performance.

ALL IS MINE, despite her unplaced effort behind STEP IT UP in the Sports Journalists of Jamaica Trophy over 1200 metres last Sunday, should rebound over her pet trip in the second race for $250,000-$210,000 claimers over the straight.

Seven will face the starter, but from all indications, it should come down to a straight fight between ALL IS MINE, to be ridden by competent 3kg claiming apprentice Kuri Powell for trainer Terence McWhinney and the Ryan Darby-trained RAJA HINDUSTANI under champion jockey Dane Nelson.

Both are not only down In class but notched their last wins over the course in recent month.

PERSIAN BELLE, now better for last Sunday's pipeopener behind WATER WAVE over a mile, reverts to the ideal trip trip (1200 metres) in the third race and with Nelson retaining the ride, the Patrick Chang-trained four-year-old colt should stave off RASTARAVEN ad JAVINE (regaining form) in a field of seven.

PERSIAN BELLE, who has good speed, notched his last win over the distance with Nelson aboard last September.

BAD BOY JUSTIN, who finished only 2-1/2 lengths fifth to TOUCH DE ROAD over the straight some weeks ago, has less to contend with in the fourth race over 1200 metres for maiden three-year-olds and with Shane Ellis retaining the ride, the bay gelding from the stables of Dwight Chen should win from Cardenas' mount MISS EMILY.

The last two races should be won by hat-trick seeker OVATION with the improving claiming apprentice Marc Griffiths retaining the ride, and down-in-class JARREAU (Ellis up) in the sixth over 1300 metres for $180,000 claimers.