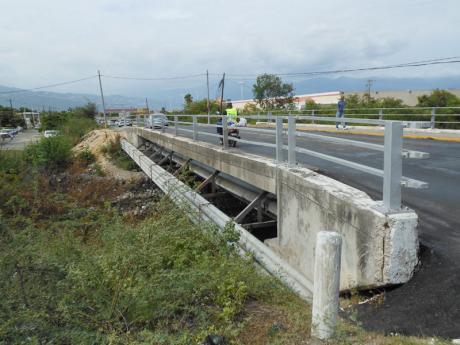 A WOMAN who threatened to leap to her death from the Edgewater Bridge in Portmore, St Catherine, Thursday night, was persuaded by residents to choose life. She was later brought to safety.

An eyewitness told The Gleaner that at about 9 p.m. the woman was seen sitting on pipes below the bridge with her attention fixated on the crocodile-infested water beneath.

Passers-by realised that she appeared agitated and enquired why she was beneath the bridge. It was soon revealed that she wanted to end her own life.

As news spread about the woman's intention, more residents soon converged on the bridge and attempted to talk her down. "Don't jump, Don't jump. Every single person was telling her not to jump which is surprising because you know how Jamaican people are," Amandarecounted to The Gleaner.

Eyewitnesses also said the woman's children were brought to the scene so she could see them as a means of dissuading her from jumping.

After much encouragement, the woman stood up and was grabbed by a male onlooker who had himself risked falling to bring her to safety.

The woman was then assisted to a waiting police vehicle and taken away.

To meet with councillor

Councillor for Edgewater Alrick Campbell told The Gleaner that he would meet with the woman's family tomorrow (Sunday) but refused to elaborate on the circumstances that could have led the woman to consider taking her own life.

"I am aware, but I won't state because I haven't gone to the family as yet. I am not in the position to state the reasons but I just want to implore anyone who is under stress to not contemplate taking their own life," he said.

(Not real name of interviewee)