'I am not extinct' - Jamaican Taino proudly declares ancestry 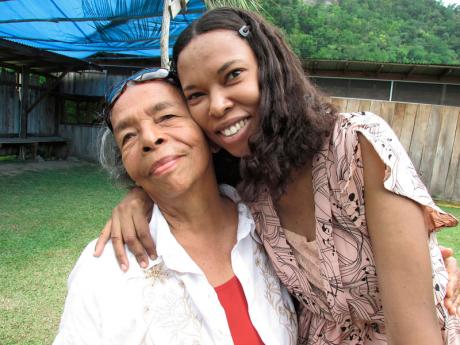 Olive Moxam-Dennis (left) said though she always knew she was Indian (Tainos), they never discussed. It was her daughter, Dr Erica Neeganagwedgin (right), who helped her to embrace her Taino heritage. 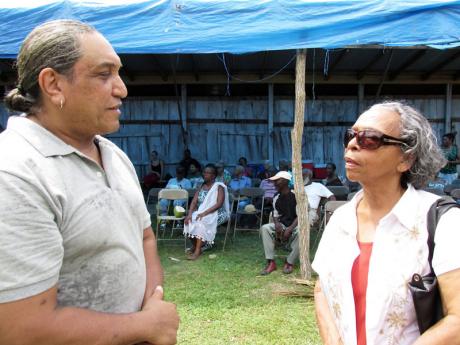 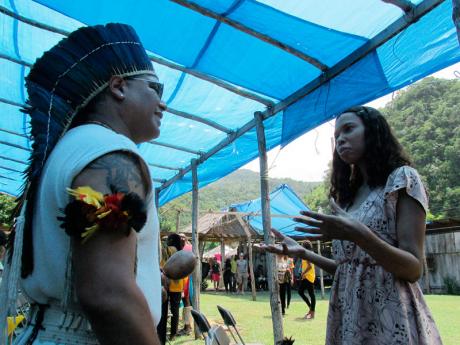 Dr Erica Neeganagwedgin, a Taino born in St Elizabeth who attended Hampton School in the said parish, makes a point to Cacique Roberto 'Mucaro' Borrero, president of the United Confederation of Taino People.
1
2
3

WHEN ERICA Dennis of south St Elizabeth was in class at Hampton School in the said parish, a teacher told the students the Tainos in Jamaica were dead. There she was being told that she, a Jamaican Taino, was extinct.

But she said because at the time, students could not talk back to teachers, she kept quiet. Yet, she said she and another Taino girl resisted by calling themselves the 'Taino Girls'. In her own family, consisting of a Taino mother and an African father, there were eight children.

In the lot, five of them look distinctly Taino and one of her sisters embraces her Taino heritage. And an older brother has always believed he was Taino. But the siblings, who were born in England, are not interested in their Taino identity.

She is now Dr Erica Neeganagwedgin, a professor at the Centre for World Indigenous Knowledge and Research, Athabasca University in Canada, where she has been living for more than 25 years.

Neeganagwedgin said her childhood days were a life of the Tainos hiding their identity because they were afraid of being ridiculed. Moreover, many Tainos could not identify with themselves because they were told that they were extinct.

"It was always painful. I was always bothered, always felt hurt that I could not express who I am. I was also afraid of being ridiculed because of what is said about Tainos in the books," she told Rural Xpress. "It is very hard. Many people don't say they are ... . All our lives, we were told they are dead ... . We have been told they have all vanished."

But Neeganagwedgin, who said her grandmother looks like a native American, stated she had always known she was Taino because of her looks, family stories, and blood memories. She recalled once driving in the back of a pickup, and when she looked up into some hills, she saw "a whole bunch" of Taino people.

She was told by an elder that she was having blood memories of her Taino ancestors. The hills, valleys, and plains of south Manchester and St Elizabeth have long been known as Taino territories.

She was brought up in the Pedro Plains/Treasure Beach area, and she said many Tainos live along the coast, and mixed-race people, who believe they are mixed with other races apart from Tainos, might just be half Tainos.

Neeganagwedgin said the issue of identity was important to her as she is a proud Taino.

She had always wanted to speak about her Taino identity, did her research, and the Charles Town Maroon conference came up.

At the conference in June, she presented a paper called 'My Taino Nation: Identity, Indigeneity, Resurgence' and Self-determination'. She said she fought back tears during the emotional presentation.

Neeganagwedgin identifies herself as 100 per cent African and Taino. She wants to create an awareness in Jamaica of the presence of Jamaican Tainos, especially along the south coast. She also wants the big lie about the Tainos to be changed in the history books. She herself will be writing a book about her life as a Taino in Jamaica.