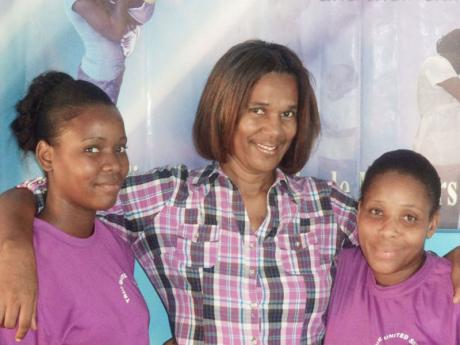 Over the years, making people happy at her expense has been the guiding philosophy for Karen Sudu who hails from Bog Walk, St Catherine

It was the inspiration she got from her mother's struggles to educate her and her three siblings that motivated her to fulfil her dream of establishing an organisation that provides financial assistance for single mothers and their children, while facilitating mothers who desire to pursue skills training and educational and income-generating programmes.

"My late father was very tight with money, and whenever he gave my mother money, that money had to do everything, and it really couldn't," Sudu shared with Rural Xpress. "So my mother bought the milk powder bags from Nestlé, and my brothers and sister and I had to make smaller paper bags for her to sell in the Spanish Town and Old Harbour markets to back up his money."

That was in 1980, when Sudu, now the mother of a 26-year-old daughter and a nine-year-old son, was a fifth-form student at St Jago High School in Spanish Town.

"I was supposed to have been studying for my exams. Instead, I had to be up late at nights making paper bags, and from that time, I told myself that when I grew up, I would help at least one child to go to school," she added.

Sudu has helped more than that "one child". In fact, she has assisted more than 50 students under a Health and Education Assistance Programme (HEAP) started by her organisation, TRUE United Sisters (TUS).

Also, mothers have got assistance to pursue educational and skills training under its Mothers' Education Grant (MEG) Programme.

"I place great emphasis on education, and for one year, while I was working at the Ministry of Labour and Social Security, I used my salary to operate a school in Linstead to pay rent, a teacher, and a skills training personnel to teach women to read and write and learn a skill in handicraft," said the upbeat former reporter.

"I am not a rich person. In fact, I'm far from being rich," she laughed. "But my life revolves around making people happy, and when I know I impact someone's life positively, I am extremely happy."

Janice Russell, mother of three and a second-year student at Moneague College, is one of the beneficiaries of TUS programme.

"I've benefited through MEG as I got assistance to do an early childhood programme at an institution in Spanish Town a few years ago," she shared with Rural Xpress.

Sudu is now on her way to fulfilling the second part of her dream as she established the True United Sisters' Enrichment Centre at 97 King Street in Vanity Fair, Linstead, recently.

"I've always wanted a home for TUS, where not only single mothers, but women in general, and men, too, can come and be blessed through different programmes," she explained.

"Now, we will be offering a number of programmes such as women's after work mingle, men in motion, teen weekend connection, special mathematics classes, classes for slow learners. A counsellor, as well will be available on designated days."

But the vibrant women's advocate, who re-established Church Road Citizens Association in 1998 and who initiated programmes in that organisation where more than 200 children benefited to the tune of $700,000, said she needs help to make the centre functional.

Among the items she needs are computers, chairs, tables, a filing cabinet, a television set, a refrigerator, a six-burner gas stove, wall fans, and utensils.

"This is because we are doing a pastry-making project with assistance from the Bureau of Women's Affairs."

The former community development officer at the Social Development Commission (SDC) hastened to add that ultimately, she wants a piece of land to erect the organisation's own building as she now pays rent for the premises they now occupy.

In the meantime, TUS is on a drive to raise $150,000 to fund HEAP this year as 20 students are slated to get help with their back-to-school supplies in September.

Like education, feeding the children is equally important to Sudu.

"We also want to establish partnerships with companies to provide food supplies, and so on, for the children of these women. This will be done under our Let's Feed Our Children programme. We are waiting on a response from Food for The Poor, but there are companies whose assistance we would welcome."

To date, TUS has hosted a basic school quiz in 2009 and 2010, with Kingston Bookshop being the major sponsor. It's an activity Sudu said would be resumed in 2015. TUS has also staged a mothers' spelling bee competition and other educational programmes.

For her selfless service, Sudu received an award from the St Catherine Parish Council in 2005 for meritorious service to community development. She was also awarded by Women's Media Watch while working as a reporter at the Jamaica Information Service in 1996 and was recognised by the National Council for Senior Citizens in 2003 for promoting quality of life for an ageing society.

And according to Fay Swaby, president of Rosemount Citizens' Association and member of the TUS Board: "Karen is a fantastic human being who cares about people, maybe even more than herself, and if she gets assistance to set up the enrichment centre as she desires, she would do wonders for not only women, but people in general."