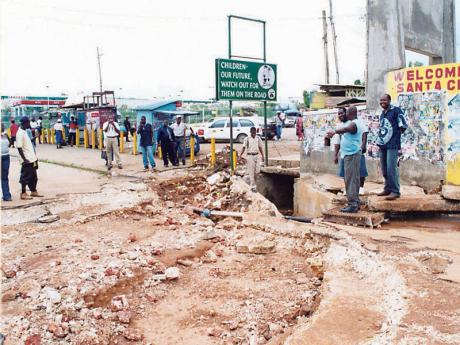 A section of the roadway in Santa Cruz, St Elizabeth, which was split in two in 2005.

TWO MONTHS into the hurricane season, and with the naming of the first tropical storm - Arthur - Babsie, a resident of Institution Drive, Santa Cruz, is worried about the effects a hurricane could have on her and her family.

A hurricane can be considered one of nature's most powerful and deadliest forces. One way in which a hurricane can leave a path of destruction is through flooding caused by the heavy rainfall associated with the weather system. After the winds have subsided, the tremendous amounts of rainfall can cause significant flooding.

This is an occurrence that Babsie is all too familiar with, and despite the authorities saying that the parish is ready for a hurricane, she disagrees and is concerned about the long-standing drainage issue that has plagued the town, especially as she claims that whenever it rains, the water that is carried away by the existing drain runs into her yard.

Babsie says in addition to flooding her yard, the entrance is also affected, preventing anyone from entering or leaving once it starts raining heavily

"Every time rain fi fall, we fret. The heavy rain that fell the other day, it almost flood we out. Me haffi use the board [to try and prevent the water from coming in], and all we haffi do is stand up and watch. People out [on the road] a use them phone [videoing what was happening]. If we [want to] go out, we just have to wait till [all the] water run off. The whole place [was] under water," Babsie said.

She added that it did not have to rain heavily in the town for them to be flooded, but if it rained in the hills, they were still affected.

She also recalled a time when the force of the water flowed hard enough to cut the Santa Cruz main road in two.

"All of the water tunnel through this yard. From ever since, Santa Cruz never build a good drainage system. [The road was cut in two] because of the water. A that same water come through the yard all the time," Richard told Rural Xpress.

He said that they had always had an issue with flooding, and as the town continued to develop, the situation worsened.

"Santa Cruz no plan none at all. That a the major thing. The parish council nuh do no work down yah so. All the businessman a set up them business, and nobody no say, 'Come, mek we lobby the Government fi get some proper drainage for the town'," Richard told Rural Xpress.

Babsie said they had been promised that there would be some sort of compensation for things they had lost as a result of flooding, but that promise was yet to be fulfilled.

"There was a lady come from Kingston say the Government send them, say everybody who lose things, they would pay us back some money. Them just promise we, and all now ... . The situation terrible, man, for a little place that a go develop and get commercialised," Babsie said.