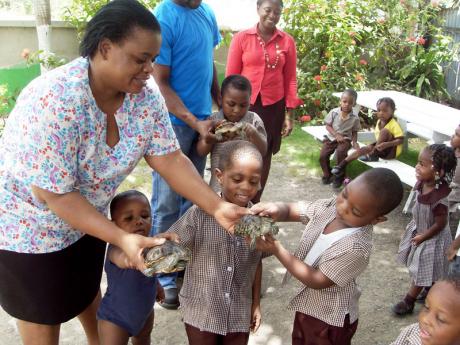 Cecelia Davis tries to interest the students in touching and holding the turtles. 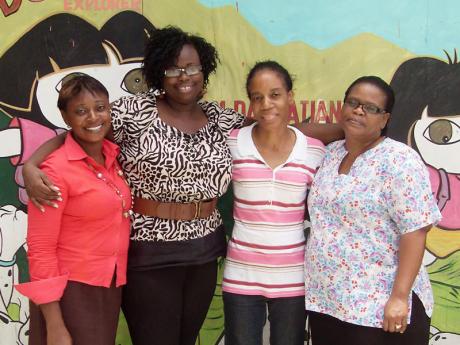 The Angel's Daycare, Preschool and Kindergarten, located on Old Harbour Road in St Catherine, is in dire need of assistance. Come next Thursday, July 10, the teachers, parents, and the little angels who benefit from the institution will have to begin making preparations to find somewhere else to go.

Since 2012, Cecelia Davis, principal, has been on a quest to purchase the property on which the 24-hour, seven-days-per-week facility stands. The facility boasts five classrooms, three bathrooms, two nurseries, a kitchen, and ample playground space. She has been in operation there since 2000.

The property is being sold for approximately $8 million. The 10 per cent deposit on the purchase price has already been paid. Currently, the institution has an arrangement with the Victoria Mutual Building Society (VMBS), which will see the institution getting a commercial loan of $4.8 million. The school now has to come up with the remaining $2.4 million to begin the process.

However, that has been the main challenge, coming up with the $2.4 million. According to Davis, the institution did attempt fundraising - a fish fry and seeking donations on the street - which netted approximately $50,000.

She continued: "I've appealed to a number of institutions and organisations. I've been in contact with the Ministry of Education but was told that they can only assist with furniture or other supplies for the school."

On her struggle to keep the doors open, she said: "I started losing students because parents thought that the school was closing. I had about 63 students in January."

Currently, there are 15 students at the institution, with another 30 students already registered for September.

When Rural Xpress visited the institution, the students could be seen playing under the attentive eyes of teachers Sasheika Shaw-Steele and Racquel Coley.

Shaw-Steele, who sounded the alarm on the pending closure, said: "I saw the need to do so because of my love for the children. They are comfortable here."

She continued, "We don't want the school to close, and time is running out."

Coley spoke about her experience working with the children, saying, "The kids are fun, though they are a handful." On the possible closure, she said: "We have to keep the doors open because we benefit, too. We would be out of a job. We are behind Davis 100 per cent."

Try to be the best

On what makes Angel's preschool and kindergarten different, she said: "We offer Spanish and music lessons. Normal basic schools don't have that. We go more in depth. We have students reading at grade two level. We try to be the best."

Parent and member of the school board, Avia Gordon, said: "I travel a lot for my work, and I feel comfortable knowing my son is there. It would be a challenge to find somewhere else that offers this kind of convenient 24-hour service."

On her child's development since being a student at the institution, she said: "He has grown tremendously in speech and writing - it shocks me - for his age. He wants to get things for himself, do things for himself, and he says, 'Auntie says to be independent.'"

Davis, who is a devout Christian, remains optimistic that her dream and mission will be achieved. She said: "The Lord has taken me every step of the way. I know He wants me to have it. With Him, all things are possible".

Her husband, Lloyd Morris, who has been supportive throughout the process, said: "We just have to keep praying. We know that something is going to work out."