Shelly back on track in Paris 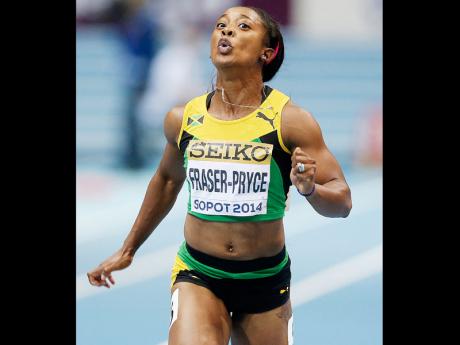 Shelly-Ann Fraser-Pryce admitted that she is not in her best shape but is anxious to get back on track after two months of injury problems with a solid performance at today's Diamond League meet in Paris.

Fraser-Pryce has struggled with a leg issue for the past few weeks and has not featured competitively since the Rome Diamond League on June 5. The two-time Olympic and five-time World Cham-pionships gold medallist, will line up in fiery 200m, stacked with big names with fast times.

"I wouldn't say that I'm at 100 percent right now. But all athletes have problems and injuries. It comes with sport, when you push your limits you'll always have some problems. But it's been two pretty rough months, which is a bit unusual for me," Fraser-Pryce said during the build up to the meet. "So I'm just looking to see what happens tomorrow, as it will be my first race since Rome. I just want to finish the race and run as fast as possible. There's no room for error because we have a very talented group of female athletes."

The reigning world champion over the 100m, 200m and 60m, will face world leader Tori Bowie (22.18), who will be going for her third win in as many 200m starts as well as Olympic champion Allyson Felix, Blessing Okagbare and Simone Facey (22.67) - the second fastest Jamaican this year behind Fraser-Pryce (22.53).

Another keen contest is expected in the women's 400m where Novlene Williams-Mills will be looking to extend her six-race winning streak. Save for an early season loss at the Jamaica International Invitational, the Jamaican veteran has not seen the heel of a competitor, but with US Nationals second and third placed finishers - a resurgent Sanya Richards-Ross, who posted 49.66 in Sacremento last week, and Natasha Hastings set to meet her in the blocks, she may face her toughest test yet.

London Olympics sprint hurdles bronze medal winner, Hansle Parchment, will be looking to brush aside last week's loss at the National Senior Championships to Andrew Riley when he comes up against one of the hottest 110m hurdles athletes around in Pascal Martinot-Lagarde, who has finished in the top three of all his eleven starts this season, World champion David Oliver, Ryan Wilson and Jason Richardson.