Brazil fans over the moon 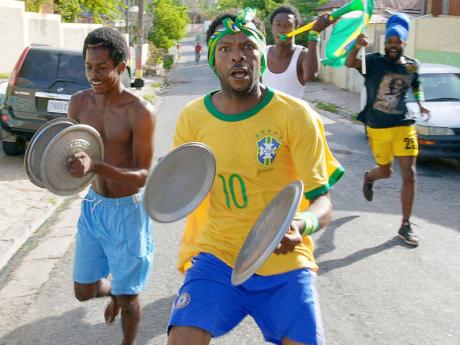 Some Brazil fans took to the streets of Kingston with pot covers, flags and horns to celebrate the team's second goal in their World Cup quarter-final against Colombia yesterday. Brazil won 2-1. - Gladstone Taylor/Photographer

There was a carnival atmosphere inside the Sportmax Zone yesterday as supporters of favourites Brazil danced and cheered loudly during their team's 2-1 victory over Colombia in the quarter-finals yesterday.

Sportsmax Zone, which is located at the Chinese Benevolent Association, was filled to capacity, as supporters of Brazil cramped into the venue either to watch the game on a 36x17 ft screen or relax in VIP area to view the game on high-definition (HD) plasma televisions.

The venue erupted in the eighth minute of the game when Brazil's captain Thiago Silva arrived at the back post to score his team's opening goal.

The Brazilians supporters, who were clad in their yellow and green, celebrated the goal with chants of Brazil, Brazil, while others blew Vuvuzelas and cheered loudly.

There was more wild celebrations again from the Brazil supporters in the 68th minute when David Luiz doubled the hosts' lead with a spectacular 30-yard free kick.

"For me it was the best performance from Brazil for the entire World Cup," said fan Sasher Dixon.

SportsMax Zone is a joint collaboration between Flow, The Gleaner, JustBet and Courts Jamaica Limited.