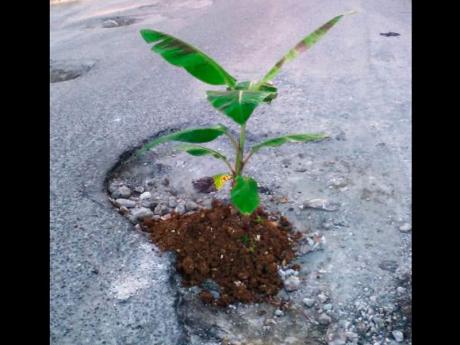 A banana tree sapling planted by residents of Westgate Hills in a pothole on the thoroughfare to the community to protest the bad road conditions in the area.

Residents of the Westgate Hills community in Montego Bay are planting banana trees in the pothole-riddled roadway leading into the community to emphasise the long-standing poor state of the road.

While the banana plants in the potholes sparked much curiosity and amusement among passers-by, the residents said that they were driven to plant the trees in an effort to express their frustration with the road conditions, which often facilitate robberies in the area at night.

"The road surface is like farm lands, so making use of it for cultivation is a good idea," said Dalton Harris, a civil servant and resident of Westgate Hills for some 20 years.

"Our lives are in danger, especially at night because several residents have been robbed when they slow down to go through these holes. It is a disgrace," Harris said.

Another resident, businessman Debo Crawford, said that although other people might find the idea of planting bananas in the potholes funny, the potholes themselves are no laughing matter.

"While this might seem funny to many, it is not a joke when you see the wheel of a vehicle popping off or residents who travel at night forced to divert because of fear of being robbed. Our community deserves better," said Crawford.

Western Focus was also told that Avery Rose-Green, the councillor for the Mount Salem Division, which includes Westgate Hills, is currently off the island.

However, when contacted, Janelle Ricketts, community relations officer for the National Works Agency (NWA) western region, said that the area in question was not in the purview of her entity.

"It is not in our domain. The NWA is responsible for main roads," she said. "... It should be local government's responsibility, but I cannot speak definitively because sometimes these developments are not handed over to them."

Checks by the Western Focus team revealed that the elected councillor, Avery Rose Green, spends most of her time in the United States. According to a very reliable source, a selection process has begun to choose her replacement.

However, businessman and resident Dwight Crawford said a proper road way was needed for every citizen.

"It should not have to come to pranks like this to get our issues resolved," he said. "We may laugh at the banana trees, but I hope we do not wait until someone suffers serious injury before we act."