Kelvin Hall is new president of Rotary Club of Lucea 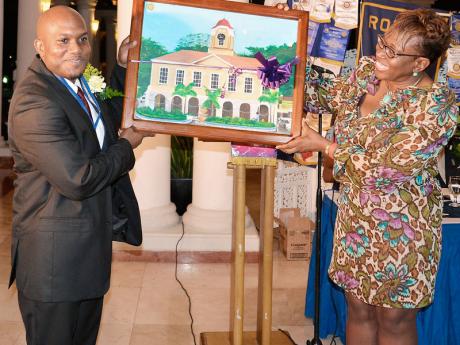 Newly installed president of the Rotary Club of Lucea, Kelvin Hall, presents a painting of the landmark Hanover Parish Council Building to Director of Public Prosecutions Paula Llewellyn following her keynote speech at the Annual Presidential Installation of the Club at the Grand Palladium last Saturday night. -- Photo by Claudia Gardner 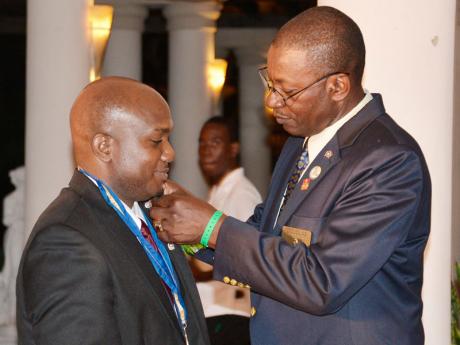 Assistant Governor Douglas Arnold affixes the presidential pin to mark the installation of Kelvin Hall (left) as President of the Rotary Club of Lucea during the 40th Presidential Installation of the Hanover-based Club at the Grand Palladium on Saturday night. - Photo by Claudia Gardner
1
2

Kelvin Hall, manager of the Lucea branch of the National Commercial Bank (NCB), was installed as president of the Rotary Club of Lucea at the organisation's 40th Presidential Installation last Saturday night in Lucea.

The event, which was held at the Grand Palladium resort, Hanover, saw scores of Rotarians, members of staff of the NCB, Director of Public Prosecutions Paula Llewellyn, (who was the keynote speaker), and other well-wishers in attendance.

In his address, Hall said he was assuming the role as president of the Rotary Club of Lucea 40 years after another banker, Rotarian Paul Green, who was an employee of the Barclay's Bank (now NCB), established the organisation after he was transferred to Hanover from St Ann in 1974.

"Forty years later, an employee of National Commercial Bank, that same bank, will now take on the task of offering service above self for the people of Hanover. I want to thank the leaders of my organisation who have supported me to take on this leadership role in the community," Hall said.

Hall said in keeping with this year's Rotary International theme, 'Light up Rotary', his organisation, in collaboration with other Rotary clubs and international partners, would be undertaking and continuing several development programmes, including annual clean-up and beautification projects; recognising and rewarding outstanding community personnel; and conducting public awareness programmes targeted at business owners and professionals.

In terms of educational projects, he said the club would be continuing the maintenance of the Chambers Pen Basic School. He added that one of the major projects this year would be the repair and enhancement of the learning facilities at the Mt Pellier Basic School in Sandy Bay.

"We will also continue to enhance the level of literacy in schools in our parish with our partners Hollins and Southwestern universities from the United States," he said.