'Broken Sky' goes beyond the surface 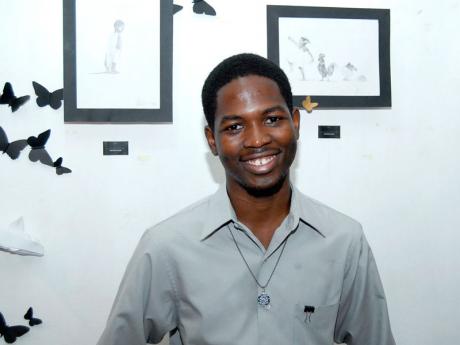 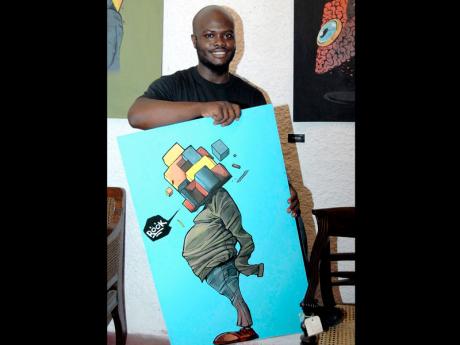 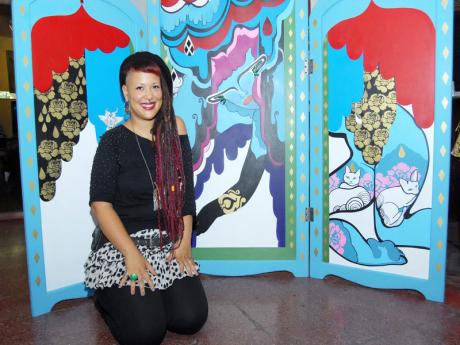 Katherine Silvera kneels in front of her piece, 'Thought Map'.
1
2
3

Art can provide an outlet for often-ignored voices, ideas and perspective without which society couldn't function. 'Broken Sky', an exhibition held at the Bolivar Gallery under the auspices of Kingston on the Edge Urban Art Festival (KOTE) 2014, addresses these imbalances, including gender inequality and equally important issues of conscious awareness and psychic health.

Twenty-one-year-old Jesane Jackson, one of three exhibitors at the Bolivar Gallery, used a contemporary format of street art to replicate personalities. His paintings titled 'Chess Pieces' is broader in range than the typical street artist and is a cross between the more popular street art in addition to illustrations.

While a student at the Golden Spring Primary School, Jackson and his cousin used deodorant bottle covers to construct cars and, after that, it was a jostle between the siblings as to which of them could draw or create the best car.

Jackson's work isn't the typical personality profile as he delves deeper into the individual's thoughts and actions. "I do not replicate the person just as I see them. I use their personality and things that surround them to do my pieces. Most people try to fit in and that is not good. Persons should try to make a difference by being themselves," he said.

Plans are in the pipeline to use street art painting as a commercial venture, in which companies can use art to develop their brands. He is also trying to obtain sponsorship to design a movable street gallery.

Katherine Silvera, another exhibitor, with her pieces titled 'Thought Maps' wants her audience to delve into her thoughts and opinions and be moved by the work so that they can enquire within themselves and think about their issues.

"The pieces are more autobiographical and look at the wider issues of being a woman in Jamaica. They are a reminder that there is strength in women because women do not get the recognition that they deserve," Silvera said.

Since returning to Jamaica, Silvera has had a number of exhibitions; however, her focus for this year is trying to get more involved in the Jamaican art scene. "A lot of people see my work on social media, but they do not see the person who is behind the work. The aim is to always be turning out new work and trying new things," she said.

Meanwhile, Antwain Clarke's craft has improved significantly since his days at Wolmer's Boys' School. Now a student at the University of Technology, pursuing studies in Urban and Regional Planning, his work has taken on a deeper meaning.

He describes his artistic prowess as creativity rather than being creative. "I think about the subject matter and what it means then I put pencil to paper. It is not just about my feelings, but what I want to convey," Clarke said.

His collection titled 'Shady Breeze' is a continuation of a series delving into Jamaican folklore. "The subject is dark, but the work is delicate. Jamaicans tend to view folklore with scepticism, but they identify with other cultures and their folklore, for example, Halloween," Clarke said.

The Jamaican folklore, he said, is disappearing because of an aversion to it, and his work represents the forgotten aspects of the Jamaican culture.

KOTE, the largest visual and performing arts festival in the English-speaking Caribbean, featured the latest work by some of Kingston's leading painters, sculptors, dancers, dramatists, performance artists, poets and musicians (among others); and an exploration of the artistic spirit of Kingston.

Participants were invited to interpret the theme 'Balance' as they saw fit, with a view to creating an open conversation about issues of central importance.